Song Hye-kyo's personality through her hands 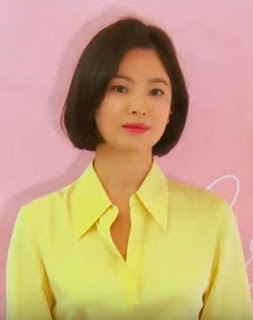 Song Hye-kyo, a beautiful and talented South Korean actor, is very popular in South-East Asia even now, after being in the entertainment industry for over 20 years. She is one of the highest-paid actresses in Korea today.

She has soft, refined looking hands, with long, tapering fingers and long, fine lines. Her thumb is long and held close to the hand. While the Moon mount is developed, the Mars and Venus mounts are not. She has a curved heartline rising to a place in-between the first two fingers, a long slightly curved headline (attached to the lifeline) going near to the edge of the hand. The Saturn or Fate line on her hand is long too, starting near the base of the hand and reaching up to the base of the Saturn finger.

Her hand shows her to be very sensitive and to some extent, an introverted, impressionable personality. She has a tendency to be secretive and is also a private person. She is not outwardly warm,

and neither is she the type to reach out easily to others, but she can be quite emotional and demonstrative of her love. She is a strong-willed and passionate woman but can be self-centered at times. She is the kind of person who will do exactly what she wants regardless of what anyone thinks, and though she may appear soft and submissive, she is not. It may not be easy to get along with her on an intimate level as it needs a deep understanding of who she is.

Creative talent is evident on her hand as well as focus. Being quite goal-oriented from a young age, hard work, talent and charisma all must have combined have resulted in the great success that she has achieved. She knows what she wants but aggression as such is not seen on her hand. In fact, there is vulnerability, feelings of insecurity along with the sensitiveness.

Added to this mix, there is high idealism, intense at times. She would have strong values and beliefs and would be unwilling to compromise these ideals, either for love or money or even for the sake of society. This could work out to be a disadvantage.

You can check out her hand photos here and here.

Her hand also shows a strong physicality and when combined with passion and talent, it can reveal itself in a charismatic persona.

Another aspect of her character shown on her hand is a liking for comforts and luxuries. She enjoys good food as well. As her hand shows self-control, she can control this side of her character.

The best part is that her hand shows life fulfilment and happiness in life ultimately, which is amazing considering the sensitive and idealistic person that she is. This kind of immense satisfaction generally is evident in people who work hard towards their goals and are able to merge their aspirations with the opportunities available. Though her hand shows contentment, it does not show whether she will marry and find love eventually, although she could. To confirm whether she finds love, it is important to see her hand in detail.

Overall, her hand shows a focussed person who tends to get what she wants without being pushy or mean.

Read about other South Korean actors like Hyun Bin, Lee Min-ho and Jun Ji-hyun, as well as the BTS heartthrob Jeon Jung-kook.

More related hand readings: Do read about what the hands say about another famous East Asian actor, Takeru Satoh (a famous Japanese actor) or read about celebs from East Asia (and Hollywood) like Jackie Chan, Bruce Lee, Michelle Yeoh, Chow Yun Fat, or about East Asian politicians like Xi Jinping or Li Keqiang or Lee Kuan Yew of Singapore. Or perhaps you would be more interested in businessman, Jack Ma or spiritual head His Holiness Dalai Lama from Tibet.