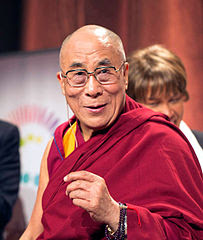 His Holiness Dalai Lama is the spiritual and political leader of Tibet. As a palmist and hand reader, one would expect significant differences between his passive and active hands because his life changed dramatically when he was a child and this would have impacted his personality and the future. The passive hand shows inherited/subconscious qualities (in Dalai Lama's case his left hand is the passive one) and the right active hand would show the current state of his mind.
There are some differences. The headline is longer on the right, and a sister line has appeared on his right hand at the start of the heartline, strengthening it. The Upper Moon mount and Upper Mars are more developed on his right hand. Also, on his left hand, the lifeline restricts the Mount of Venus, especially after it reaches half way, but on the right hand, the lifeline ends between the Venus and Moon mounts. The lower part of the Venus mount is also less developed.
The Dalai Lama was born in a poor family and his name was Lhamo Thondup. If he had not been “recognized” as the Dalai Lama he might have led an ordinary life although the good qualities he was born with might have made him become someone important as his inherited hand also shows leadership qualities.

The positive aspects of the Dalai Lama’s (inherited) character are his intelligence, intellectualism and imagination. Expectedly, these qualities were enhanced, which must be due to his upbringing. His mental strength also increased significantly, and he became a calmer, and stronger person, able to resist obstacles in life in a serene manner. Considering that he was born with intense emotions, this aspect of him is important. He also became more people-oriented, and better able to connect with people.
Almost all the mounts on his hand are developed, and the lines are long, fine and the headline slopes deeply into the Moon mount. His hand is a square shape with a squarish broad palm and short fingers which are a little thick. The first and third phalanges of his fingers are long and the second are a little short relatively speaking. The Mercury (little) finger is long and the other fingers are in balance with each other. Unlike other famous people, the Dalai Lama does not have a dominant Apollo (ring) finger. Overall, his head and heart lines are balanced. The lifeline throws a branch into the Jupiter mount at the start, almost like it starts from it.
Check out a hand photograph of his here.

His hand shows his deep love and compassion for all people, a love without limitation, compassion for all without restricting itself to certain people, and this is one of the indications of true spirituality.
However, as he grows older he will tend to live in his own world, although his engagement with people will never stop.
Not only did mental stamina increase, his hand shows that sexual passions were suppressed/controlled. He has full control over his strong emotions and can show a calm demeanour to the world although this does not mean that he does not feel intensely.

His hand shows that he is capable of objective thinking, has a broad view of the world, and there is a very good balance between his mind and his heart. At the same time, he is someone idealistic and sentimental. This is an inborn trait but it has become enhanced.
His hand shows a completely non-materialistic person and he was born that way. It shows a person with unusual and remarkable leadership ability which is inherited and developed further over the years. This hand belongs to a person who is confident, calm and mentally strong and someone with an uncanny ability to rule and control without seeming to do so.

His hand does not show ascetic qualities as such. He likes his food but I do not see anything wrong with that.


Related reading: Check out The hands of Swami Sivananda Saraswati of Rishikesh and Swami Chidananda (which explains the difference between modern and the old gurus) and also read about Swami Prabhupada of ISKCON
Or read about the comparison between Shirdi Sai Baba with Sathya Sai Baba

Or try the label Spiritual leaders for hand readings of Spiritual Leaders from different parts of the world including the Pope, the Ayatollah, Mother Teresa and also Mahatma Gandhi, or Dr. Sarvepalli Radhakrishnan.