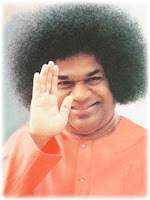 He is only too human
Sathya Sai Baba’s fingers tell us that he enjoys the pleasures of life, just like you and me. There is nothing bad in this indication and in itself doesn't show that he is a fraud, as most people are like this. It is very rare indeed to find a hand that shows an ascetic bent of mind…and you guessed it! Sai Baba of Shirdi’s hands indicate that he has that kind of mind, and shows him to be a genuinely spiritual person. 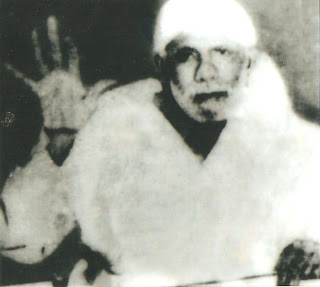 Sathya Sai Baba has average willpower
Sathya Sai Baba has a good thumb, but it is not exceptional. Although it is of a good size, it’s on a normal-sized hand, and the phalanges are normal-sized, and all of this shows a normal Will. And the Will is softened by conic tips and a supple thumb, and on the left passive hand, the thumb is a little high-set, and this shows weakness.

Why am I emphasizing the Will? Because only a strong will can save a person from temptation. Considering the accusations against him, one needs to keep this aspect of his nature in mind. At least in his early years, he was likely to have been selfish. 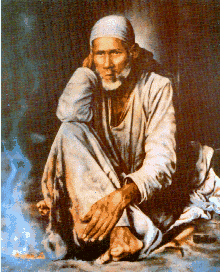 The hands of the Sai Baba of Shirdi are very large and fingers are long too, as compared to his body.

Check this from the photograph on the left (from this site.) This is a sign of someone who is calm, collected, someone who is in complete control of his emotions. It is a rare sign to have.

In addition, the thumb is very long, low-set, has a very strong upper phalange and is held apart from the hand. All the fingers are widely held. Yes, a supple thumb is not always a good sign, but on this hand, where all the other signs are good, it shows openness and adaptability. Overall, strong willpower is shown, and also a deep compassion for human beings and a strong desire to help them and total control! A true ascetic. In fact, a supple thumb and flexible hands, are necessary on a hand which shows such a strong will, as this is what gives him the softness, openness, humanity and understanding of people.

More about Sathya Sai Baba
But surely Sathya Sai Baba, the new Sai Baba, has something in him which is divine as well? Well, his hands show that he does have compassion for humanity, although this sign is much weaker in his hand than it is in the hands of the Sai Baba of Shirdi. Sathya Sai Baba does genuinely feel for people and can be very generous as well. It is interesting to note that this is a developed trait. It is missing in his left hand, the hand which shows inherited tendencies. The only explanation as far as I can see is that when he chose his calling (that of Godman) he decided to nurture this trait. It is possible to develop any quality in oneself, especially if there is pressure from society, and one is young enough and the desire to change is present.

Desire for power
Sathya Sai Baba's Jupiter (index) finger is long and a little bent with a conic tip. This shows a person with a great sense of self, strong idealism and intense belief in a cause as well as a person who desires responsibility and power and has the ability to honour commitments (not a bad trait in itself), although such fingers are a better fit on politicians. In fact, these qualities combined with his thumb qualities can show charisma. But his finger is a little too long and the traits could be a bit excessive. This can mean too much righteousness and even arrogance – taken to a dogmatic level. I personally do not believe that strong righteousness is a divine trait.

Wisdom
The Saturn mount and finger is very important when it comes to wise and holy men as this is what shows wisdom and the ability to think. Yes, Sathya Sai Baba has it, but it is not an extreme development. Shouldn't wise and holy men possess an overdose of wisdom? Well, the Shirdi Baba certainly has it! He has a beautiful Saturn finger towering above the rest, and the best part of it is the shape. It shows that this holy man has the qualities of wisdom, soberness, strong focus, thinking ability, philosophical bent of mind…and an abundance of it!

What seems unpalatable is the shape of the Saturn finger on Sathya Sai Baba's hand (the new Baba) because it shows some of the negative qualities of this finger, like something akin to pessimism, or rather, some amount of negativity and bitterness, and also vindictiveness. This again shows him up for being only too human.

Risky business
The Sun (ring) finger on Sathya Sai Baba's hand shows a person who is a showman, and one who views life as a gamble. He is someone who will take great risks in life to get what he wants. I have already mentioned the factors which drive him. The tendency to overestimate oneself can lead one down a risky path. I think this trait is the key to his personality.