The hand analysis of the Princess of Wales, Lady Diana

Diana, the Princess of Wales, was not an heir to the throne of England, but her hands show that she had some blue blood, if not running in her veins, then certainly in her heart and soul. There are a lot of "facts" about her on the internet, but here through her hand reading, you can find out who she was in her heart. Whether it was poise, sensitivity and grace that she had, or whether it was the love and care and compassion that she felt for people, this woman was a real queen. Her hands show it. She was born an aristocrat and died as one. Her hands also explain why she threw it all away and why her marriage to Prince Charles (now the King) was doomed from the start.

Diana's hands have light lines, and the ridges are fine, and the palm seems soft. She has a low-set thumb, and this is the most important digit in hand reading. She also had a developed Mount of Venus although Mars is not that well-developed. She had many good qualities and one of them was adeep compassion and love for people. 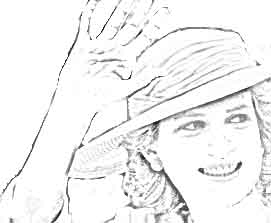 Talent for making money
Her hand shows the ability to make money. Usually, this characteristic is accompanied by pragmatism, a strong, dominant nature and a desire for wealth, but these qualities are not shown on her hand. Thus, the money-making ability sits a little oddly with her, but then every individual is a hotpot of different qualities and that is what makes us all unique. Diana’s hands also show her to be an idealistic person in many ways, and very sensitive too. This delicate sensibility makes her character a little weak, and then her hand shows her to be inward thinking. If we take money-making talent + sensitivity + idealism + love for humanity, what do we get? But let's not connect the dots as yet...

Her hand shows charisma as well, just like her ex-husband, King Charles. There is also spontaneity in her disposition; a kind of brilliance. A love for wealth and fame is present to some extent, but her deeply philanthropic mind-set shows that she would never want it just for herself. Her hand shows genuine philanthropy and desire to help people, and this quality is far more deeply entrenched in her than in King Charles ..and when one connects the dots, one finds a person who can make money if she wants to, but does not really want to, not for herself that is. Drive and ambition is limited.
Diana always lived on a higher plane, and it was but natural that she would turn to raising money for charity. However, she was not consistent, and the explanation for that is further down the post. 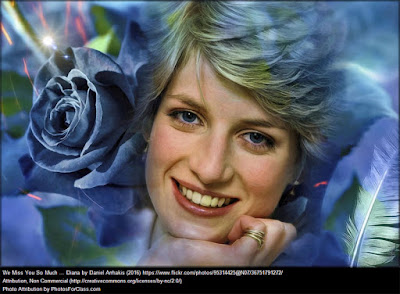 Her personal life
Diana may have had a fantastic public persona, and with good reason, but she was likely very different in her personal life. It is almost as if she had a double personality. She could not have been an easy person to live with. She had emotional conflicts and was possibly mentally fragile, and thus only an equally sensitive person could have understood her. She needed a lot of love and care, that is who she was and yes, she needed attention.

Diana lacked aggressiveness but her hands show that she did not lack any ability to manipulate. Very often people who are not aggressive find other ways to get their will done. Diana could also see the negative side to almost everything quite easily (including herself) and was likely to be a brooder. Although she could enjoy herself, the shadow was likely always present. There is an increased tendency towards jealousy and unhappiness. If things did not go her way, if Di did not get what she needed, then she would suffer and it could result in bitterness. Quite the opposite of Charles in fact. In real life, if it was not an arranged match, they would never have been together.
A lot of people have written that it was Charles who was jealous of the attention that Diana got in public, but Charles' hands show that he is not that type. Anger is more his thing. His evident displeasure had more to do with anger, rather than jealousy.

Diana was not a fighter, quite deficient in Martian qualities. She lacked a fighting spirit and staying power, and lacked aggressiveness as well. She was the type who would suffer in silence, expecting to be understood, expecting to be treated with love. It is likely that Diana was lacking in energy as well, to some extent. Such people cannot sustain any career or work for very long because of a lack of consistency or maybe a certain listlessness.

In addition, Lady Diana was impulsive and impressionable and yet wilful. Not a very great combination.

Charles and Diana
Diana married Prince Charles for love, but public reports indicate that they never got along. It is highly unlikely that he married her for love and was likely forced into it. This mistake then is on him. He did not stand up for what he really wanted and ruined her life.
They are so different. He is a straightforward, arrogant, aggressive, short-tempered and inflexible person while she was like a delicate flower which needed watering.

Diana had not married Prince Charles to be queen, but to be loved and cherished like a princess. She could have sustained a long-term relationship with a man who was attentive, devoted, and attentive.

Related Reading: The hand analysis of her husband Prince Charles and her son Prince William or her daughter-in-law Meghan Markle or son, Prince Harry.