Rishi Sunak - a good Prime Minister or not? 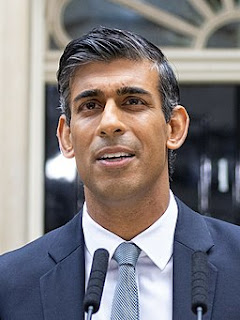 There is no doubt that Rishi Sunak’s hands show that he is smart, sensible, emotionally stable and has common sense. He came to power as the Prime Minister of Britain in unusual circumstances, but now the question is whether he will do a good job and manage to steer Britain out of the problems it is in currently.

He is certainly capable of it, if one goes by his hands. He has a large hand with clear lines, the fingers are of medium length and held apart, and the palm is broad. He has rounded tips to his fingers and the first phalanges of the fingers are long, except on his Jupiter (index) finger. He does appear to have a slightly short Jupiter finger and the Mercury (little) finger is low-set although it is long. Although the mounts on his hand are developed, they are not excessively developed. The heart and head lines are balanced with each other, even if the headline is a little high and not absolutely straight. The head and life lines are joined with each other considerably before separating.

Rishi Sunak has been compared to Barack Obama, and sure, there are some similarities in their hands in the sense that they both have large hands and clear lines. But the similarity ends there. In reality, they are both

very different people. Sunak lacks Obama’s brilliance, the breadth of his compassion and also his flexibility.

You can check out Rishi Sunak's hand photo here.

There is no doubt that Sunak has some excellent qualities. He is a fairly clear thinker and cool-headed, but his hands show a level of introversion and insecurity of the self. Perhaps that is why his ideas change and maybe even his values. He is not sure of himself, and not daring enough for a leader. Thus bold decision-making can become a challenge. Instead, he is the type who treads carefully. There could be some element of self-centeredness in his personality as well and there is a desire for the limelight. Unfortunately, this also means that he can be swayed.

But he is a doer and likes to go ahead and get the job done. He is a reasonable man, very much amenable to logic and his heart is in the right place. No doubt he is a thinker, broad thinking and sensible, and one can say quite a liberal thinking person from his hand. Oddly enough, in politics, he belongs to the Conservative party of Britain.

When it comes to ideals, his are more of the practical sort. He does not have a strong belief system. He is shrewd though and has an uncanny way of saying the right thing at the right time. He can evaluate situations and people quite well and this is a great quality in a politician.

Related Reading: Read about Boris Johnson, or about the difference between Margaret Thatcher and Indira Gandhi, or perhaps you want to know what David Cameron is like.

Find out what the hands of Heads of State from all over the world tell you.

Or read about other famous British personalities from the United Kingdom. Or perhaps you would like to read about the Royals?