Kartik Aaryan - is he the right fit for Bollywood?

Kartik Aaryan is a popular Bollywood star. He has made waves in more ways than one, but one should take these things with a pinch of salt as Bollywood has its own rules which a newcomer might find it difficult to navigate. Talent is the only thing that should count, and in the case of actors, looks and style as well. Apparently, Kartik has these three aspects in good measure…but does he have the right personality to make it in Bollywood? 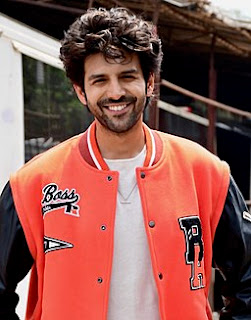 His hand has a broad palm and fingers of a good length, which have a mix of conic and rounded tips. The Jupiter (index) finger is high-set, conic, and a little bent, but it is of normal length. The other fingers are of normal length as well, and not significantly bent. Kartik has a good thumb, it’s long with a conic tip. The lines on his palm are dark, possibly a little thick.
The palm lines on Kartik Aaryan’s hand are intriguing as it is possible that he has two headlines.

Unfortunately, there is no clear photo of his palms on the net, and therefore the lines are not too visible, making it impossible to confirm whether he has more than one headline. The heartline is long and curved but the lifeline and the fate line are not that clear in the photos. The mounts of Venus, Jupiter, Moon and Lower Mars are developed.

His hand shows that he was possibly a little shy as a kid although he opens up as he grows into his late teens. Ambition, charisma, creativity and ego are all shown on his hand. He is likely to be extremely articulate and expressive in his real life, and this may or may not help at work. People who tend to talk a lot often say things they regret.

Aggression and pushiness are visible on his hand and when one thinks of his ego and penchant to talk…it's easy to see how Kartik can rub people the wrong way.

Although he is ambitious, he does not have a craving for the limelight or even riches, as many actors (and politicians) tend to have, so these will not be what drives him. So, what drives Kartik Aaryan? He tends to be dominating and yes, his hand shows that he is a little controlling as well.

It is likely that power is his driving force, as are people. His hand shows a warm, caring nature. Perhaps if he gives more emphasis to analytical thinking, he can turn out to be excellent behind the camera.

Related: Check out the hand readings of other male Indian actors like Hrithik Roshan, Ranvir Singh, Aamir Khan or Ranbir Kapoor, or Salman Khan or Amitabh Bachchan, or the legendary Kishore Kumar or do you want to know the The magic behind Rajesh Khanna's super stardom?

Or find out about Sushant Singh Rajput, a bright star which shone for a short time.

Or perhaps you might like to read about the popular Telugu actor Prabhas Raju Uppalapati or the Kannada legend Rajnikanth.
Read about female Bollywood actors like Alia Bhatt, Priyanka Chopra or Kareena Kapoor or Deepika Padukone or Aishwarya Rai  or Kangana Ranaut or Rani Mukerji or Madhuri Dixit.

There are other hand readings of Bollywood (Indian) actors on this blog, as well as those from Hollywood.