Rajnikant is not your typical narcissistic film star and his hands bear it out quite starkly. He has a long palm and longish fingers (except for the Jupiter finger which is also low-set). Notice the short and fairly slim lower phalanges, a few conic tips to the fingers which happen to be very straight and the joint life and headlines. He has good lines too, clear, straightish heart and head lines. The mount of Moon and Lower Mars are very well developed.

Rajni's hand tells us about a personality which is simple, shy, lacking in vanity, and with a disinterest in living a showy lifestyle. On the downside, Rajni is likely to have had
self-esteem issues at a young age, more so before the age of thirty. In fact, his hand shows acute introversion in childhood and such people are not just sensitive, they are late bloomers. Perhaps this is the reason why fame did not go to his head – his inherent shyness and humility followed him into his adult years and kept him grounded.
A hand image of his can be seen here. 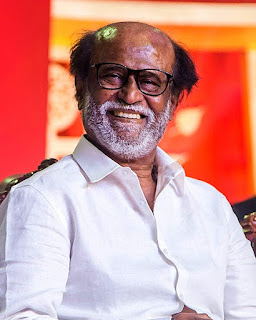 Some of Rajnikanth’s personality characteristics which changed, or rather developed, were to his advantage, like that of aggressiveness and creativity. This can be seen by comparing the active and passive hands. The active hand tells you about the current personality and the passive hand about the inherited/subconscious qualities.
An ability enhanced over and above what has been inherited is an indication of a self-made person. Such hands, where the natural ability of a person is developed almost from scratch is unusual in any hand and shows intense dedication to the craft, immense focus and hard work. These people have it harder than most because a conducive environment is usually missing. What this means is that family members do not possess similar talents, and are therefore unable to mentor or inspire the person. Many people with such developed abilities come from humble backgrounds although this is not always so.

A strong business mindset is shown in Rajnikant’s hands, perfectly acceptable in the hands of a commercial movie star. He may not be an intellectual but his hands show him to be extremely shrewd and aggressive, with a natural ability to evaluate people and the ability to handle money. Of course, his sensitivity and introversion would be a disadvantage.

His hands also show him to be a straightforward, broad-minded, cheerful and optimistic person who loves life. He is creative and imaginative. His hands are quite normal in every way, showing normal passions, compassion and warmth belonging to a person who would be easy to get along with in his personal life. Moodiness is shown, but not melancholy.

One cannot help but think that the larger-than-life persona that Rajni portrays in his films is diametrically opposite to his real personality. Maybe his shyness stopped him from expressing his true self, his real greatness. He was able to express himself by acting.
(Rajnikanth is a top Indian movie star, more famous in the South Indian Film industry).

Know more about the personalities of the Telugu star Prabhas Raju Uppalapati or Tamil star Kamal Hassan or megastar MG Ramachandran (MGR)
Or check out the hand readings of other Indian actors who are legends: The magic behind Rajesh Khanna's superstardom or Amitabh Bachchan's hand analysis or Rekha or the singer/actor Kishore Kumar.

You might like to read about some other Bollywood actors like Salman Khan, Aamir Khan, Aishwarya Rai, Rani Mukerji, or Madhuri Dixit and Shah Rukh Khan, Hritik Roshan, the more established actors who work in Hindi cinema. And there are many many more readings of Hindi film actors and actresses on this blog. Just type in the name of your favourite celebrity in the search box!

Or check out the hand readings of all the movie Actors from different parts of the world, or specifically from Bollywood or Hollywood.

(Free photo published on this post is from the wiki by Dani Charles, Silverscreen Media Inc. [https://silverscreen.in] / CC BY-SA [https://creativecommons.org/licenses/by-sa/3.0])