Jaggi Vasudev (Sadhguru) has loyal followers and a good name, but some may wonder if the Guru is genuine or not? The hand can reveal some truths about his character.
His hands show willpower and determination. His thinking may not always be logical, but he has good reasoning powers and can be persuaded. Plus, he is fairly balanced in his emotions, as well as an independent thinker and doer. He is shrewd, and can be a little manipulative as well. He likes the limelight but overall his hand shows that he is quite straightforward and not a crook.

Sadhguru has a square palm and short fingers and in Palmistry this is known as a square or practical hand. His fingers are thick, and a little bent. The thumb is long and supple with a thick first phalange although this phalange is not too long. He has a deep heartline, a wide and well-developed Venus mount, and the mounts on his palm are developed, but not excessively. The headline slopes suddenly into the Moon mount although it has a lighter branch which goes straight. His head and lifelines are joined considerably and he has good second phalanges.
Check out a hand photo of his here.
(The sketch below has been sent to me by a reader.) 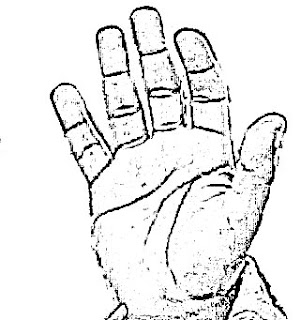 Certainly, this indicates a person who is warm, with a lot of love to give to people but his hand is not that of a true humanitarian. He is too secretive and closed for this. for all humanity and balanced in his emotions. He possesses the qualities of loyalty, generosity, and complete engagement and faith in his work, a broad outlook, and an understanding of larger issues. He has some idealism but at heart, he is a pragmatic man. He is an action-oriented person who avoids excesses, both of mind and body. His thinking is also fairly clear although he is no intellectual.

His weaknesses are his impulsiveness and lack of diplomacy and also stubbornness. He also likes fame.
He likes his comforts although he is not a materialistic person at all. He has financial sense and business ability which is above average. There is some contradiction in his personality as he also has an introspective, thoughtful and non-materialistic attitude.

He does have some idealism in his personality but it is moderate. He will not set store by blind faith or superstition. This makes him a trustworthy person to some extent, even though he is not a typical ascetic.


(Jaggi Vasudev, known as Sadhguru, is an Indian Yogi guru who founded the Isha Foundation).

Or try the label Spiritual leaders for hand readings of Spiritual Leaders from different parts of the world including the Pope, the Ayatollah, the Dalai Lama, Mother Teresa and also Mahatma Gandhi, Sai Baba or Dr Sarvepalli Radhakrishnan.