Cameron's personality is more controlling and manipulative than Brown's, although to be fair to Cameron, their hands show that both are control freaks. Brown is however more pugnacious and argumentative, which can grate on people’s nerves. Cameron on the other hand is
pretty smooth, and may not appear to be as controlling and clever as he actually is.

David Cameron has a squarish palm and medium-length fingers with rounded tips. The Jupiter (index) finger is bent considerably and the Saturn (middle) finger is also bent. The other fingers are fairly straight. The hand has a good thumb, in the sense that the thumb is long with its first and second phalanges balanced with each other in length. It is held relatively close to the hand. The phalanges of the other fingers are also well balanced with each other.
The mounts of Moon, Venus and Jupiter are the most prominent mounts. Lower Mars is developed to some extent.
Check out his hand photo here and here. (The photo published in this post is a free photo).
His palm has fine lines. The heartline is long, more or less straight, and entering the Jupiter mount. The headline is a little sloping and fairly long.
His hands also show that he can be over-critical and cynical and at times can find it difficult to see the good side even if it is staring him in the face. And he can be quite a mean customer if need be. However, his meanness is not worn on his sleeve. He is far too refined for that. However, he can be very aggressive and pushy if need be. 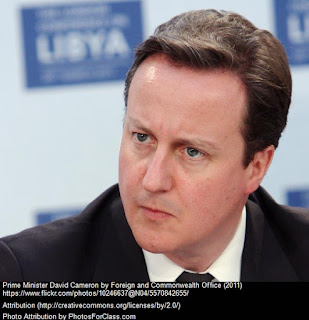 Cameron's hands show that he is a passionate man, with a love for his fellow human beings; he is warm and friendly, even if not outgoing as such. He is a private person and will keep his cards close to his chest.
He can be a little selfish as well, although he is a stronger leader than Gordon Brown, although less reasonable. He can at times become quite the bully. Brown is pushy and aggressive as well, but Cameron is more so. However, Cameron is reasonable and can be flexible if need be. If he wasn't he could be quite obnoxious. He would be more open to new ideas than that Brown.

Cameron is a shrewd and persuasive speaker who can carry people along with him.

(His left hand was studied for this reading as he writes with his left hand and therefore this is the hand which reveals the current state of mind and tells us who Cameron is today).

Ideally, those who care about people should get into politics because that is their job. Sure, Cameron does care about people but to be truly good for the public at large, one needs an unselfish approach and one should do things even if they do not directly benefit oneself. From this angle, Brown is the better candidate.

Related Reading: Find out about the personalities of other British politicians like Rishi Sunak, Boris Johnson and Gordon Brown. Or perhaps you want to know more about England's greatest woman politician: Margaret Thatcher (in this post she is compared to another great woman politician, Indira Gandhi)

Perhaps you want to know what makes the Politicians of the world tick. Or what lies behind those smiling Royal faces like King Charles and Prince William? Are the Royals super nice or just humans like us, stuck behind masks because of their privileged status?