Bal Thackeray's hands tell us about his character

Balasaheb Thackeray has some very good qualities, as revealed by his hand. He has genuine ideals and beliefs. He is high-minded, righteous, and is an honourable man. He has ethics and strong beliefs and is probably religious. He always had these qualities. It's probably these very traits which drew people to him. He has the ability to inspire people, and it is likely that over the years he developed leadership qualities. He was not born a strong leader, as is evident from
the comparison of both his hands. 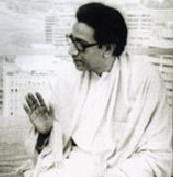 The right hand shows his current state of mind and Thackeray’s right thumb shows highly developed leadership qualities - the ability to lead and control others. This is not evident in his left hand. Not just that, both the thumb phalanges are balanced, a desirable trait in a true leader. Such people have the ability to see another point of view and listen to others, a trait confirmed by the shape of the quadrangle. Thackeray may not have been born a leader, but he became one.

The shape of his hand shows that he is thoughtful and dignified. He takes his time to come to a decision and tries to be fair, although he may not always grasp the complete picture.

He has a long hand, a narrow palm relatively speaking. He has long fingers as well and long lines with a forked heartline, ending on the Jupiter mount. His fingers are tapering, almost conic, with dominant second phalanges. Although his Apollo (ring) finger seems dominant, the Jupiter (index) finger is good too, even if a little low-set and slightly bent. The moon mount and both Upper and Lower Mars dominate his hand but the Venus mount is oddly under-developed.

You can see a photo of his hand here.

Bal Thackeray is a known right-winger and his hand bears this out. A strong idealist, he tends to see issues subjectively. Such views would affect not just his work life, but personal life as well. There would be a tendency to view the world and also family, from his own point of view, possibly a selfish point of view. He possibly lacks warmth of personality and possibly lacks empathy as well.

However, he was also capable of immense generosity of heart and he is the kind who would do a lot for others, even if they are not near and dear ones.

When it comes to his inner circle, he is the type who would be very selective in those he loved and trusted.

He is a thinker, an intellectual, but also quite able to manipulate and control.

He is likely to be sensitive and even touchy, particularly about small things. He would be easily hurt and is the suspicious type. He could very likely imagine the worst of people. Secretiveness is also shown.

Yes, he always wanted fame and name but not to an extreme.

He is a fighter, in the sense not just aggressive but someone who would stick to his stand no matter what. He has the courage to stick it out and it is not surprising that Thackeray once expressed his admiration for Hitler. Perhaps Thackeray had a few personality traits in common with Hitler, if one goes by what is known about Hitler. The strong, unwavering and idealistic belief in a cause? Hitler was, of course, insane, but thankfully Bal Thackeray is not.


(Bal Thackeray [1926-2012] was the founder and chief of the Shiv Sena, a right-wing political party based in Maharashtra. The small black and white photograph published here is from his website.)

Or read about Sharad and Ajit Pawar or Rajiv Gandhi

Or read about Politicians from all around the world.