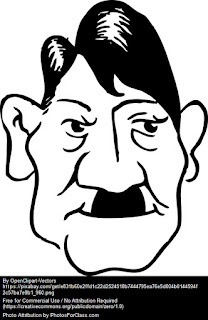 Adolf Hitler is a well-known mass murderer. One assumes that it was his violent nature and beliefs about a “pure” race that led to the evil he let loose into the world. However, the psychological profiles of all mass murderers are not the same. In Hitler’s case, his hands reveal that his murderous nature has less to do with his so-called ideals and more to do with his coarse and brutish temperament.
It's hard to read the hand of someone like Hitler because invariably one has strong feelings when it comes to him and this can influence the reading however hard one tries to be objective. He is the greatest villain in history!

His hand reveals to a great degree who Hitler was.
A link to one of his hand photos is here and here.  The photo published on this post is a free photograph.
The lower part of his hand is developed, as well as his lower phalanges. The other signs on his hand are a reddish and developed lower mount of Moon which I have not seen on any other hand. And the mount of Mars is developed and the third phalanges are thick, particularly of the Apollo (ring) and the Saturn (middle) finger. The thumb is a good length but not too long and its second phalange is thick which seems to go with the general thickness of the lower part of the hand. The Saturn finger seems to be quite bent but the other fingers seem fairly straight. The finger of Jupiter (index) seems a little short with the tip pointed. The lines on his hand are of medium length, thin, and there seems to be a Girdle of Venus, the line above the heartline. The headline is the clearer line, although uneven and islanded at the end, and the heartline is of very poor quality. The line of Fate or Saturn is the strongest line.
This combination of hand features is something that I have not observed on any hand. It shows that he lived on a low, sensual plane. Such people enjoy their own pleasures above all else. And he lacked true leadership qualities and self-control. And he had a vivid imagination, out of control – a morbid, self-absorbed kind of thinking usually would consume him. And despite this, he was idealistic to an extreme and he had some kind of goal in his life and the drive to reach that goal!
No doubt Adolf Hitler was a complex person. A man who felt strongly about his destiny, a man who saw this path clearly. A man with a focus and with strong ideals and beliefs. But he didn't have the personality to go with it. With these characteristics it is possible to achieve much but Hitler's thinking was warped by his sick imagination. And that's just one aspect of his personality. He was also very moody, extremely cynical and bitter and didn't like people much, and was cold at heart. He was in fact incapable of feeling positively about anyone, and it is doubtful that he ever cared for anyone in his life. Sure, he could be sentimental and sensitive, even demonstrative but the capacity for deep love is not seen on his hand. In fact, his sensitivity would make others feel his emotions were fake. They weren't, because Hitler was insecure about himself and likely had an inferiority complex. But he also had a huge ego and status symbols probably bolstered his low self-esteem. Status mattered to him a lot.

One knows that Adolf Hitler had a troubled childhood because it has been reported that his father used to beat him on a regular basis. Even if at the time, parents beating up their children was the norm rather than the exception, maybe in Hitler's case he didn't receive love. Besides, not all kids who are beaten by their parents become mass murderers. In the case of Hitler, it was probably a unique combination of an imbibed violence throughout childhood, the lack of love (his mother did not protect him), and an emotionally sensitive nature which could make him wallow in his misery and probably give more importance to small slights. Worse, it was the average intelligence, lack of self-esteem, inability to care for people, maybe even a dislike of people, a morbid imagination, a pushy, aggressive nature and a great desire to believe in something all combined to make him who he was.

The coarse nature of one's disposition colours all aspects of personality, just as refinement softens one's weakness of character. In Hitler's case, the coarseness, which he probably inherited enhanced all his bad qualities. It is very difficult for such people to appreciate anything elevating like art or literature, and if they do so, it is superficial. In Hitler's case, his emotional sensitivity could make him react to a piece of art, but this did not extend to any deep understanding or love of art.

Every person is driven by a goal or need. In Hitler's case, this is true; he was driven. Power was one of his needs and then there was his extreme belligerence which made his evil actions possible.

Why exactly he latched on to the cause he did, was likely because of his surroundings and the opportunities he got, the people he met. He could have latched on to any cause. It is interesting that at one time in his life he wanted to become a minister...perhaps if he had been guided in that direction he would have become one, even if a fanatical one who would have done evil in that position. Maybe in that role, he may not have turned out to be a mass murderer. The role he finally chose gave him the chance to act out his aggression and this would be the preferred route because of the physical aggression and coarseness of his personality.

Hitler's hand does not show deviousness, oddly enough. He had a tendency to be upfront and blunt. He was the type who could lay all his cards on the table and in some ways could even be unaware of how people actually perceived him, self-absorbed as he was. Self-awareness was low.

It is interesting to note that he has several well-marked crosses on his hand. They are perfectly marked, and not part of the main lines. Such crosses are usually very signs and their meaning depends on where they are found. Hitler's hand is indeed a rare specimen.

In an earlier post, I referred to an Indian politician called Bal Thackeray who had likened himself to Hitler. I had said that Thackeray did have something in common with Hitler, but now after reading Hitler's hand, I take those words back.