Mother (Saint) Teresa's hands tell us who she was 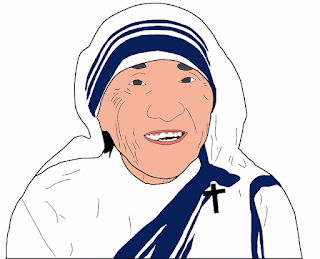 The primary personality characteristic that Mother/Saint Theresa or Teresa, is associated with was her philanthropy. And sure enough, this particular quality was on her hand.

For one thing, Mother Teresa had a long, low-set thumb (on her right hand), but it was held close to the hand and it was very supple. Her Apollo (ring) finger was dominant. Her hand also had highly developed mounts of Venus and Moon, as well as Jupiter. The lines were dark and the lower part of her hand was thick. Her fingers were thick too, with not very long first phalanges, possibly short if one takes into account the length of her hand.
Her heartline was the dominant line on her hand, long and sweeping and it was low-set. The lifeline is also good.
Her palm was slightly long and her fingers were short in comparison. The Jupiter (index) finger is pointed, on both hands and it is also low-set.
Check out a hand photograph of hers here and here.
Her hand tells us about her determination and her idealism, but it also tells us that she was not a perfect person. She was ordained as a Saint in 2016, by the Christian Church and also received the Nobel Peace Prize as far back as 1979. Her hand does not show her to be a saint.
Her hand shows that strength, love and compassion along with determination were the backbones of her character. As was a strong belief system, so glaringly evident in the pointed Jupiter finger. This sign shows a strong desire to believe in a cause and anyone who has this sign latches on to something in their life. This belief can be in anything – and in Mother Teresa's hands we know it was Christianity.
Then there was her immense energy and ability to channel her strong will into a productive cause and all of this brought to her where she finally reached - sainthood. However, if one compares her hand to say, Sai Baba, she falls woefully short.
Mother Teresa's hand shows that she had a strong practical streak, wanted to be useful, and had a strong desire to make a difference. Her hand shows a desire for name and fame and this is one main aspect of her character that sets her apart from a real saint. However, she had some great qualities.
Her hand shows deep generosity and a desire for freedom, not just for herself, but for others. She could bend easily, and embrace anything that came her way. As if this is not enough to make a person great, she was open-minded and helpful. She was humble, and simple at heart. Money did not mean much to her and she was always ruled by her heart. She was also quite impulsive.
Objective thinking was not her forte and she was far from an intellectual. She was more of a doer.
Love was in her heart no doubt and she was able to express this love. She channelled it into a cause which brought her fame.

She was a self-made woman
An interesting aspect of Mother Theresa’s hand is that there is a distinct difference between her left (passive) and right (active) hands. As she was right-handed, and her right hand shows what she actually was, and her left hand reveals her inherited qualities. The differences in the hands signify that Mother Teresa was not born such a great lady. She was born a little selfish and secretive, and one is not sure how she changed so much.
Possibly when she saw people suffering, the love she had in her heart just poured out. Or perhaps Mother Teresa was motivated by her religiosity which was imbibed in her since childhood. However, her religiosity assumed a practical tinge as she grew older, with less belief in ideals and more of a determination to see results on the ground. This is because she did not believe in theory; she was a doer. Whoever she became, it was by growing as a person and that is creditable. She did not inherit such a great nature...if she had, then she would have built on that, and become a real saint, perhaps! Finally, all of us have to work with what we get.
She inherited a base nature, and certainly not intellectual. She would have found it difficult to understand concepts, and she probably did not think much of people who theorised.
Her being a practical, action-oriented woman, made her achieve what she did in her life. Talking meant little to her and in fact, she was not very articulate, but she was a street-smart lady. She was also a straightforward and no-nonsense type of person.
She rose to be a better person, but some of her not-so-nice personality traits did persist, like her difficulty in understanding another point of view, her stubbornness, and lack of reasoning powers. It was lucky for the world that she chose to become a person to help the poor, and not a dictator of a country!
How and why people change, either to become greater than they are or why they destroy their lives, is something of a mystery.

To conclude one can say that Mother Theresa’s hands show her to be a practical down-to-earth person, a human being who thought of others before herself.

Read about other Spirituals Leaders from different parts of the world like the hand analysis of Mahatma Gandhi or Pope Benedict XVI or Ayatollah Khomeini or the Dalai Lama.
Or maybe you would like to know the difference between Satya Sai Baba and Sai Baba of Shirdi or a comparison of Gurus Old and New
Or check out the hand reading of a modern guru like Deepak Chopra or Bikram Chowdhury.
(This post was edited in December 2022)


Free Image by Daniel Joshua Paul from Pixabay
Posted by Nita at 12:02 PM