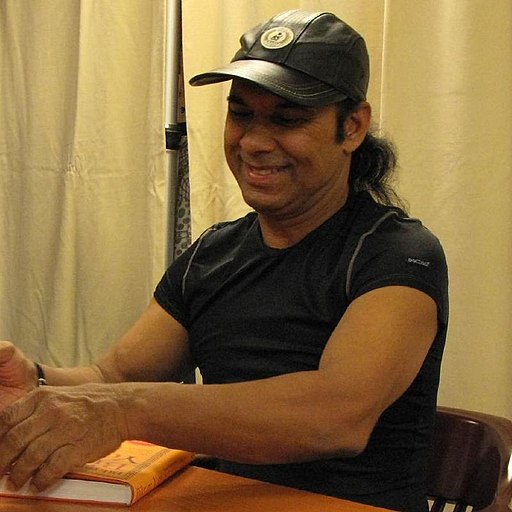 This yoga guru, an American citizen of Indian origin, has been accused of megalomania, sexual harassment, rape, and abusive behaviour. Is this evident on his hand? Can the hand tell us the inside story?

Bikram Choudhury has a fleshy hand with well-developed mounts of Venus and Moon, a broad palm and shortish fingers. His hand shape would fall into the “practical” hand type. His fingers are more or less straight except for the Jupiter (index) finger. The first phalanges are developed but so are the third, particularly those of Jupiter and Mercury. The lines of his palm
are long and thick and the thumb is fleshy too.

You can check out his hand photo here and here. Unfortunately, the photos of his hand available on the net are not very good so the reading done here is a limited one.

His basic temperament is a practical one, with the material and the sensual dominating his consciousness. That doesn't quite sit well with spiritualism, but not all yogis are spiritual. Bikram Chowdhury's hands tell us that he is not a "spiritual" type. His goals would always fall in the realm of the practical and the material.

Health, concentration and a clear mind is shown on his hand. Expressive powers are also shown although he is the kind who would be blunt, direct.

His hand shows that he is controlling but it doesn’t show megalomania as such, because megalomania implies high regard for oneself. This he does not have. His hand shows insecurities about the self and also a great and almost irrational fear about what others think of him. He did project a grandiose version of himself to the outside world, but his hands tell us that he did not really believe this fantastic version of himself. He knows who he really is; his mind is very clear and focussed. He also has an excellent memory.

That Bikram feared public opinion to an extreme is evident because there are numerous articles where his accusers have claimed that they were forced to keep silent because of feelings of obligation to him and in some cases because they feared financial loss. He created an environment where people became afraid of speaking out, according to the new Netflix documentary on him. Now that his reputation has been tarnished, it must be Bikram’s worst nightmare come true because he would be feeling that he has been “found out.” His reputation was his most precious commodity because for all the wealth that he generated, money was never as important to him as his image. Probably why he is trying to build it again.

Although his hands show great capability and organisation skills, they do not show high intelligence. This could have been a factor in his downfall.

When it comes to rape allegations, whether a person is a rapist cannot always be seen from the hand. If the owner of the hand believes that he is God’s gift to the opposite sex, he will never think of himself as a predator and it will thus not show on the hand.

Or you can check out the hands of Spiritual leaders from across the world.
Posted by Nita at 1:15 PM