William John Warner, known as Cheiro, made palmistry well known but there are those who feel that his books do not explain exactly how he arrived at conclusions and it is something of a mystery as to how he made such accurate predictions. I tend to agree with this and believe that it is unlikely that Cheiro himself knew how he did it. His extraordinary ability probably came from strong intuition, bordering on sixth sense.

His hand corroborates this. It shows
a clearly marked Intuition Line plus a well-marked Ring of Jupiter. In combination, these signs indicate a strong intuitive ability and understanding of human beings and maybe some kind of ESP. A very superior ability to understand others, and a high level of empathy for others, that Cheiro had. That is who Cheiro really was. He was far more than just a palmist. 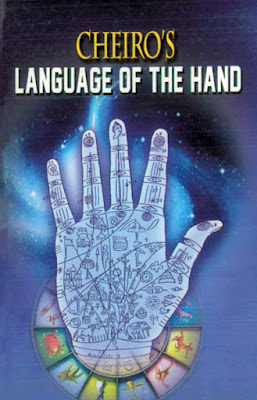 He had some other extraordinary signs on his hand. One of them was the double headline and it's significant that both headlines were clear and stable. One of these headlines starts from the Jupiter mount and this is an extremely rare sign, and I have personally not seen it before on any hand. The fate or Saturn line and the Apollo or Sunline were both clearly marked on this hand – clean, unbroken lines. He had two sunlines, another very rare sign. And of course, there was the Intuition line, again rare to have it so clearly marked. In combination, these signs show brilliance of a kind never seen before. Palmists of all hues should be grateful that a man of such capability studied Palmistry and made it popular.
(Check out a picture of his hand here).
He was ambitious from a young age and he was a leader of men. A true leader, someone with a magnetic personality who could draw others to him. He understood people, had great empathy and this must have helped him a great deal in his work.
It is amazing that he used his "powers" in a productive and positive way and he did that because he was a good man.
He would have had the ability to handle people with ease and would have possessed a diplomatic, persuasive and manipulative ability bordering on magical. He very likely mesmerised people. This is probably how Cheiro managed to successfully and personally read the hands of so many famous people, even those who did not believe in the science of hand reading. He must have had a magnetic personality.

Cheiro’s hand has another unusual sign, a line leaving the fateline and heading towards the Mount of Sun. This is a sign I saw in President Radhakrishnan’s hand as well, and shows a person who has reached where he is through sheer grit and determination and great personal effort. Such people often do not have social and family support. They usually start from scratch and reach great heights of success because of their strong character.

No authentic record of Cheiro’s early life is available but his origins must have been humble. The name he called himself by - Count Louis Hamon – has not been authenticated. This is probably a name he took on to impress people, particularly the rich and famous, in the same way that the nickname Cheiro gave him a mysterious and occult persona. Oh yes, he was a clever man, capable of duping people.
Hand Reading or Palmistry was not popular at the time when Cheiro came on the scene (in the West) and it must have been difficult for him to establish himself. He did it using his strong and clever personality as well as his talent. Interestingly, Cheiro has not posted the picture of his left hand in his book which could have given away his past. Perhaps his passive hand would not have shown such a brilliant mind.

Cheiro made palmistry famous (although more for its predictive side) by making accurate predictions of the future even though he could not show convincingly how he did it. He couldn't really have shown it with any accuracy because the hand does not show accurate future life events. Predictive palmistry involves trends rather than events and is tentative at best, because the lines of the hand (which show life events) can change, particularly in those people who are self-aware and make a conscious effort to change. This Cheiro has himself demonstrated by giving examples in his book. He has shown how his clients changed and thus changed their lines.

Ancient Indian palmistry is also predictive in nature and this is in tandem with the ancient art of Astrology. As Cheiro learnt hand-reading in India, it is likely that he was impressed with this aspect of hand-reading and possibly believed this to be palmistry's main function (predictions). He used his strongly developed perceptive and intuitive ability in combination with the principles of palmistry to make the most amazing predictions! He is also believed to have made use of Numerology and Astrology to make even more exact predictions.

I have written a lot about whether one can predict the future by reading the palm. If you go through the posts, you will get some answers:
How hard is it to change the future?, How much control do we have over our future?, Death and Hand Reading, Stars, Crosses, Symbols and Superstition in Hand Reading, Can Palmistry predict future events?
And then you can ask yourself Why do you want to know your future?

Also check out the Palmistry FAQS or read the other articles on this website under the label Palmistry.