At times there is nothing spectacular shown on the hand but the hand does show a balanced, sensible person with plenty of energy and a reasonable amount of talent. This is so in Akshay Kumar’s case. His hand may not show an extraordinary intellect or remarkable talent but his broad and wide palm, well-shaped fingers and slightly large hand shows his 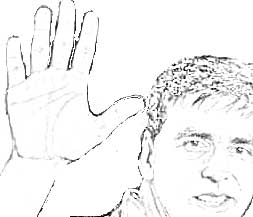 hardworking nature, a cool head, lots of energy and focus, and a sense of discipline towards a consistent goal.
Akshay has a squarish hand, with a broad palm and short fingers, which are also a little broad. Venus, Mars and Moon are the most developed mounts. The thumb is of average length but the first phalange is good. The head and heart lines are well etched and straightish. The headline is placed a bit high on the hand. The phalanges are normal in length and the Mercury (little) finger is a bit short.
Ambition is clearly written on his hand and a strong desire for worldly success. He is a man who is pragmatic and energetic and also self-sufficient. His open and independent personality is a great asset to anyone on the stage. He is also aggressive, pushy and determined and his hand shows he is a fighter in more ways than one. He is not the one to give up easily. All in all a good personality profile for any person to possess and is the kind of disposition that leads to success in any field.
You can check out his hand photos here and here.

In addition, Akki’s hands show talent and this talent is more of the practical type, and of the type and this is what enables him to be a “commercial” actor rather than one who concentrates on honing his talent to perfection. To be realistic, he is not someone who could aim for an Oscar and he probably understands this well.

Akshay’s drawback would be that he is not that great at reading people, and could in fact be manipulated by others. This does not mean that he is not a little manipulative and cunning himself. What could go against him is that he could show poor judgment at times, in choosing films for example. In fact, Akshay is rather an emotional man and could let his emotions get the better of him.

Considering that his hand also shows an amorous nature, it could translate into someone who easily falls in and out of love. However, that is not the case with Akshay. He is far too practical to do this. He is at heart a serious man, and the kind who would take love seriously and is not impressionable. He would prefer the security of a long-term relationship.

Another drawback shown on Akshay’s hand is that he tends to be a little arrogant and this “ego” could come in the way in his relationships with people. While he is not an overly jealous type, he is prone to jealousy.

If one has to see his hand as a whole it is a good hand. It is because of his determination that he made it so far, despite the fact that he lacks the cleverness to be able to manipulate people and circumstances to his advantage.

Related Reading: Character readings through Palmistry of other Indian movie stars, like Hrithik Roshan, Aamir Khan or Shah Rukh Khan or Shahid Kapoor and many many more! You can find out more about your favourite star on this blog!
Or read about the personalities of veteran megastars like MGR, Rajesh Khanna, Marlon Brando and Rajnikanth or the 2022 Bollywood star – Kartik Aaryan.
All hand readings of Bollywood and Hollywood actors.