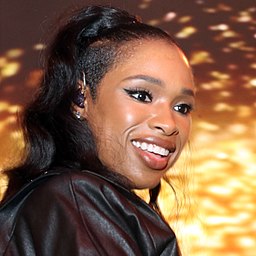 Jennifer Hudson’s broken headline has been interpreted as being caused due to the shock of a personal tragedy (the murders of her mother, brother and nephew) and perhaps it is so. However, as her headline does not break at the precise time when the tragedy took place (age 27), the answer is a bit more complicated than that.

I would interpret Jennifer’s headlines as two headlines, rather than a single broken headline as the overlap is considerable and a large gap between the headline is also present. Usually, two headlines signify two aspects of one personality, and in some cases, it can mean a double life, but later, one part takes over or maybe the second aspect of her personality becomes dominant. One cannot be sure know which applies to Jennifer but she will know.
Jennifer Hudson has a longish palm and short fingers, which are quite slim and the Saturn (middle) finger is bent. She has a long Mercury (pinky) finger and the first and second phalanges of the fingers are long. The third phalanges are significantly slim and not developed.
A link to Jennifer's hand photograph is here and another one is here.

Her hand shows an ambitious, strongly focused and materialistic person but this is just one aspect of her personality and is more prominent in the first half of her life. Possibly she changes later and becomes a different person, possibly affected by the tragedy in her life. She does not change overnight, that would be abnormal. She changes gradually. It is known that within some months of the personal tragedy, she pushed herself to continue with her career and this is no doubt due to her ambitious and striving nature which was present from a very young age.
Jennifer may not be very high on self-confidence, but she is very good at assessing people and situations. She is also a doer. These are her strengths as is her high ambition. She also has the ability to think, and there is significant talent, business sense and expressive ability. Her talent may not be in the realm of brilliance, but it is distinct and strong. Jennifer also has a tendency to be moody, and some amount of morbid thinking could trouble her. However, she does not have a depressive personality.

When her outlook on life starts to change later in life, she metamorphoses into a less materialistic person. Her thinking is better balanced, showing pragmatism and common sense. However, it also means less focus and ambition as compared to what she had earlier. She may be going against whom she is meant to be – going against her basic nature, but this way she is more peaceful.

It is likely that there are other reasons (other than the family tragedy) for the change in her personality.