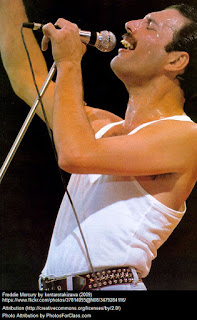 Freddie Mercury's heartline is the best line on this hand. It is gently curving and well etched. However, his hand shows that the three main lines on his hand, (Heart, Head and Life) were a little weak in childhood. We know he spent his childhood in India, his musical birthplace. It is very likely that he wasn’t happy or emotionally engaged with his life at the time. Perhaps he didn’t
know who he was.

You can check out a hand photograph of his hands here. (The photo above is a free photo.)

He embraced his true identity much later, when he changed his name. Freddie Mercury (born Farrokh Balsara) is said to have played down his Indian heritage.

True, Freddie was born British, but his parents were Parsis. And Parsis are not Persian as some people claim – they are Indians as they lived in India for centuries and absorbed Indian culture and practices. But Freddie Mercury never thought of himself as Indian or even someone with Indian roots, despite spending his childhood here, a childhood which may not have been too happy. Perhaps he wasn't that close to his parents either (they had Indian roots), however much he loved them. He was just too different.

Freddie's left (passive) and right (active) hands are quite different. The lines seem deeper and darker on his right hand, but most importantly, his Moon mount is enhanced considerably. The Venus mount seems smaller. There is a girdle of Venus on left passive hand (a broken one) but it is hardly visible on the right active hand. The fingers are less conic and the thumb more supple on the right hand and on the left, the fateline is not distinct after the thirties, and the Sunline not significant. There are those little pads on the tips of his fingers, called sensitive pads, which show enhanced sensitivity to the environment. He has well-shaped fingers of normal length. From this, it seems unlikely that Freddie Mercury would have reached his potential (despite his musical talent) if his parents had ever returned to India. Britain gave him the opportunities he needed and allowed him to enhance and develop his talents.

Do his hands show that he wasn’t born musical? Well, he was born with extraordinary emotional sensitivity, high intelligence and a creative mindset. This creative mindset increased manifold due to his environment. By this, I do not necessarily mean a positive environment. It is believed that his early environment, at a school in Panchgani was hard. He was teased in school for his buck teeth and was painfully shy. His sensitivity must have made it very difficult to bear. He must have turned to music, found he was really good at it, and concentrated on it – an escape into an inner world? The seed sprouted right there. Later, in England, he came into his own.

It was lucky that his school provided him with the opportunities he needed to start off on his musical career. But yet, if he didn’t acknowledge his roots, why blame him? He grew up in the fifties and sixties, a time when racism was well and alive in Britain. An Indian rock-star? Forget it!

His sensitivity was probably the reason why he kept his sexual orientation under wraps for a long time. It was the seventies, after all. His hand do not show that he was secretive. Secretive people are secretive about everything. Freddie just kept those things to himself which he probably thought would come back to bite him.

Despite his sensitivity and shyness (which he overcame), there is nothing on Freddie Mercury's hands to show that he was under-confident. Self-esteem wasn't an issue. That is perhaps why he never stopped striving to become better. He knew he had it in him to become great. And he did.


Note: This reading was done using the hand photos available on the internet by Koh Hasebe. I take them to be authentic because of the photographer, famous for taking photos of rock stars. However, this is the first time I have read hands of anyone without actually seeing who the hand is attached to. Unfortunately, there are no other photos of Freddie Mercury on the net which can either verify (or not) whether these are actually Freddie Mercury's hands.

Check out the hand reading of another Brit singer: Adele