Muhammad Ali was humble at heart 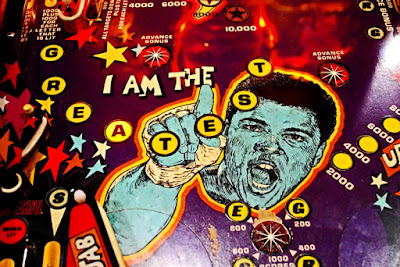 Muhammad Ali proclaimed himself to be great and then went on to prove it. He was a flamboyant personality, known to brag about his achievements, past, present and future. That is probably why people think of Muhammad Ali as someone with high confidence levels and a big ego. His hands tell a different story.

Ali had a fleshy hand, with a rectangular palm and pronounced mounts of Venus and Moon. Lower Mars is developed, but not Upper Mars. His fingers are not
particularly short or long, have conic tips with good first phalanges and long second phalanges. The Jupiter (index) and Mercury (pinkie) fingers are a little low-set. The index finger is possibly short and a little bent. He has a long thumb with a pronounced conic tip and is held close to his hand. His head and heart lines are long, even in shape, and joined considerably. The heart line has a branch going downwards and touching the lifeline.

Even if Muhammad Ali was a very aggressive, pushy and contentious man, his hands show that he was not as inwardly strong on the inside as he was on the outside. There was an inner vulnerability. He had some type of inner diffidence and oddly enough, this was not an inherited trait, but developed in childhood. It is possible that he lacked self-esteem as well. We know he grew up in an America which was divided by race and this must have left scars. If he showed the world that he was confident, then it was bravado. Perhaps when he spoke out about himself, it was also a way to reassure himself, not just to intimidate his opponents. But no doubt his words were studied and strategic. His hand shows that he was level-headed and able to plan and manipulate. Besides, his hands show expressive ability, and the ability to use dramatic words.

His aggressiveness was of a very high degree. People in competitive sports often have this and it helps them in their sport. However, it's the kind of aggression which can rub people the wrong way. There was a battling element to Muhammad Ali’s nature.

By nature, he was secretive and controlling and this would mean both in his professional and personal life.

His hand shows idealism and righteousness and this fits in well with what we know about him – his conversion to Islam and refusal to be drafted to fight in Vietnam.

His ability to succeed and his talent is seen in many places on his hand. In his clear lines, the strong thumb and the slim fingers with their long first and second phalanges. He had control, he had imagination and he knew how to strategise.

Ali had a fairly generous mindset and was a warm and affectionate person. He liked people and liked to connect with others. An inherent love of music shown on his hands. Such a person’s natural state is marriage but acutely impressionable as he was, he would have found it difficult to be faithful even under normal circumstances. But his situation was anything but normal. He was famous.

Muhammad Ali was a world-famous boxer from the United States

You might like to read about Mike Tyson's hands, or Oscar Pistorius's hand reading or why Bruce Lee's hands do not show a violent nature or about The Rock: Dwayne Johnson