Sylvester Stallone may well be a talented guy, and is neither manipulative nor selfish, but his personality (as shown by his hands) is that of a person who is passionate, emotionally volatile and impulsive and he can be difficult to live with. He has high energy levels and his hands tell a story of a person who likes to live his life to the fullest. Stallone's tendency to be unpredictable is accentuated as he thinks and acts quickly. His hands also show a very high physical sex drive and coupled with his impulsive nature, it would be difficult for him to be faithful to his partner. To counter such a passionate nature, one needs more self-control than the
average person. How did this man channelise his unbridled energy and reach the heights that he did? 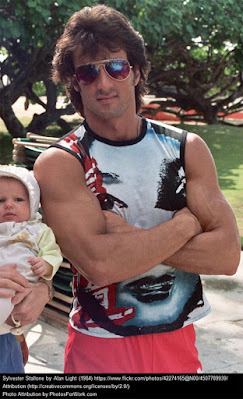 Stallone's hand has short thick fingers with average second phalanges, highly developed mounts, deep lines, and a long supple thumb. He has a good headline, long and slightly sloping. The palm is broad and squarish and the mounts of Venus, Moon, Jupiter and Mars are developed.


Even though Stallone is the kind of guy whose emotions lie just below the
surface, people do mellow with age. In his youth, Sylvester Stallone could easily have easily got into serious trouble, but he didn’t! Despite what nature had given him he led a very successful life. He managed to channel his energy into something productive. It was his basic pragmatism and clear, practical thinking that kept him on an even keel.

Common sense, rationalism and direction are shown on Stallone's hands. Also, he is a good man, with feelings for people and is warm and friendly. With these qualities, he managed to steer his life in the proper direction. However good/bad the hand is, this is the critical factor – whether one is mentally stable and sensible enough to balance one's personality. Basically, Stallone's hand tells us that he has plenty of common sense and the ability to see the consequences of his actions. He also has the ability to focus and be productive, not destructive. There is goal-oriented behaviour. Despite Stallone's volatility, his head managed to take control, and his basic common sense triumphed. He succeeded even though his hand shows poor business sense.

I suspect that the kind of movies Stallone chose, violent action movies, could have enabled him to act out his inner demons; perhaps it was therapeutic. Such roles could have given him that all-important outlet that enabled him to lead a normal and successful life. However, there is always a danger in such cases of fantasy and reality overlapping, but Stallone managed to keep his reel life from impinging on his real life.

Read about the personalities of other action heroes from Hollywood like Bruce Lee, Hugh Jackman, Arnold Schwarzenegger, or Mel Gibson and Russel Crowe, Jackie Chan, Dwayne Johnson, or Tom Hardy.
Or check out the hand analysis of Actors from all over the world, or just from Hollywood, actors like Julia Roberts, Ben Affleck, Denzel Washington, or Michelle Yeoh and many more!