Michelle Yeoh's hands show her to be different

Michelle’s Yeoh’s hands are quite different from a typical actor's hands. Her hands show her to be a practical, down-to-earth woman, with a broad and sensible outlook on life. She is far less immersed in herself than other actors. In other words, she appears to lack that quintessential quality of narcissism, which actors often possess. 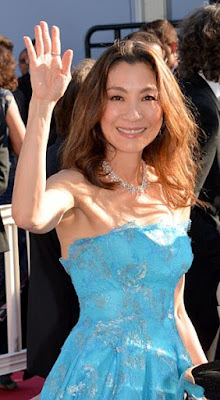 Not Michelle Yeoh though. She is an exception. It would be difficult to guess that she is a celebrity/actor by looking at her hands. Michelle has a mix of rounded, spatulate and conic tips to her fingers, which are of medium length. The thumb is long and held close to her hand, and has a long first (Will) phalange.
Plus, her palm is broad, her fingers slim and there is a largish gap between her head and life lines. The first phalanges of her fingers are long, and the second phalanges are so slim as to almost waisted. The headline is slightly sloping and goes in a very steady manner across the hand. The heartline curves up to in-between the first two fingers.
The mounts on her hand are developed but in a moderate manner.  The most prominent mounts on her hand are the mounts of Moon and Mercury.
The shape of her hand, rectangular/square with its broad palm, developed knots, slim fingers, balanced, straightish headline and strong thumb betray a strong, disciplined character rooted in reality. The thumb belongs to a person who pushes things almost in a bull-headed manner until the job is done. Her energy, action-oriented, bold and eloquent self all go into making her the doer that she is. She has the energy to make things happen once she makes up her mind. She would not be suited to a desk job. Activity would be part and parcel of her persona in whatever she chooses to do. Is it any wonder then that she is known as an action heroine?
You can check out her hand photos here and here.
Michelle is a planner as well. A thinking mind behind that strong will. She also possesses a calm, stoic nature. These are the qualities that make a person successful.
Money matters to Michelle. She is the kind who will work hard to earn her bread and butter and money will always be important. Perhaps it is a practical nature and lack of idealism that makes her this way.

She is not very aggressive and lacks a temper but she can be pushy all the same. Once she makes up her mind to do something, she will go after it. However, while Michelle is strong-willed, she can be pushed and bullied by someone stronger than her because she doesn't have it in her to fight and she is not that confident however much she shows that she is.
She has a strong sex drive, passion and a big heart. She is demonstrative towards those she loves. However, she remains a mystery woman because she can be closed, hard to approach and secretive. On one hand, she has a loving heart, and on the other hand, she seems distant and solitary, maybe even hard to some. A complex person! Michelle appears tough on the outside but is soft on the inside and very straightforward and honest in her dealings.

(Michelle Yeoh has made a name for herself in Hollywood but she is Malaysian (ethnically Chinese), born Yang Zi Chong in Malaysia. She is based in Hong Kong and is a famous actress, in the east as well as the west.)

You can read the hand analysis of Jackie Chan and Bruce Lee or another Chinese origin actors like Chow Yun Fat. Or perhaps you want to know more about the famous South Korean actor Lin Min Ho.
Also, find out what the hands say about the personas of famous Actors from all over the world.  Or read specifically about Hollywood actors or Bollywood ones. Read about famous Movie Directors from the west.