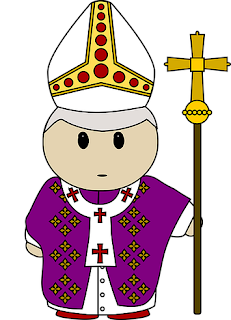 The personality or Cardinal Jorge Bergoglio or Pope Francis  as revealed by his hands is significantly different from that of the previous pope (Pope Benedict XVI). The main differences oddly enough lie in the realm of their belief system. While Pope Benedict's hands show that he was an uncompromising believer, rigid in his beliefs, Pope Francis’s hands show him to be more
pragmatic in his beliefs. True, there is some idealism, but it can be tailored to fit the situation. Pope Francis believes in taking into account the world around him; interestingly, he will see how things affect him before making any decision. He will tend to see things from his own point of view.

This is different from Pope Benedict XVI who saw issues from a broader perspective. Both men are intense, but the previous Pope had a more intense personality. Pope Francis's hands show far less belief in superstition, unlike the previous pope.

Pope Francis's hands are slightly long, dark pink in colour, with developed mounts and closely held fingers and thumb, with either square or very slightly conical tips. He has a Line of Life which sweeps across the Mount of Venus, and a slightly low-set Heartline.
You can check out an image of his hand here.

Who is the better leader? Pope Francis's hands show him to be more compromising, but his hands also show a considerable amount of secretiveness, and this is not a trust-building personality characteristic. He is blunt, although cautious, and his lack of diplomacy can affect his image and/or relationships.

A positive characteristic of Pope Francis is that he is a warm person with love to give to his people, and the warmth in his personality will translate into considerable networking and sincere attempts to reach out to people. There is, however, a desire for renown.

Pope Benedict XVI's hands do not show warmth towards people, but his hands show unselfishness, and in principle great compassion for humanity.

Note: Pope Francis is the first Latin American to become the Pope although he is ethnically Italian.