Russell Crowe and Mel Gibson are two world famous actors from Australia known for their short tempers. What are the underlying issues in their personalities here? Lack of self-control? Or tantrums because of their celebrity status? Or maybe they are being misunderstood? The hand can tell us the inside story.

At first glance, their hands seem similar - the short fingers, and the large, broad, firm but fleshy palms with the development of Moon, Venus and Mars mounts. The hands show a similarity in temperament but to a very limited extent. Both these men have plenty of energy, and both are fairly excitable, moody, and yes,
and short-tempered too. But the similarity is a superficial one.

Russell Crowe has tapering fingers and a well-balanced (phalange wise) thumb and Headline. Mel Gibson, on the other hand, has slightly thicker fingers, a thicker and stronger top phalange of the thumb which is also supple and a slightly slim second phalange, and a Headline (unfortunately not that clear in photographs) which is apparently weak after the halfway mark.

Check out an image of Russell Crowe's hand here and Mel Gibson's here. The photo below of Mel Gibson's prints is a free photograph. 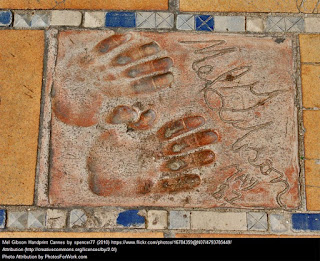 Most important, Gibson has a very pronounced Lower Mars mount and this by itself shows excessive aggression. Without a strong headline it can mean difficulty in controlling the aggression. Combined with the short temper and willful and impulsive nature, a person with such a hand can be intimidating to anyone who crosses him. But he can be diplomatic when he wants to be.

Crowe's hand shows that he lacks diplomacy and be quite direct, almost blunt. His aggression levels are high but controllable. However, the temper combined with this direct approach can rub people the wrong way. Although his hand shows a slightly mean and cynical side to his nature, Russell Crowe is the more sensible and the more refined amongst the two. He may not like people as much as Mel Gibson does, but he cannot be labelled as an angry person, not if goes by the hand. He is also sensitive, which could cause him to react to even small things. Although he likes the good life, like Gibson, he is more dedicated to his craft and his energy better directed.

You might also like Tom Cruise's hand reading or Ben Affleck's Hand Reading or Hugh Jackman's hand reading or Ashton Kutcher or Denzel Washington and Julia Roberts.
Or read the hand analysis of all the other Hollywood  actors, both men and women on this website.