Amy Winehouse - did she have suicidal tendencies?

A lot has been written about celebs and suicidal behaviour. Experts have suggested that the very quality that makes a person strive for fame (self-obsession) could be a factor in their suicidal tendencies, perhaps if life does not go according to plan. It is suspected that Robin Williams was adversely affected by the diagnosis of Parkinson’s, more affected than an average person would be.

This self-obsession is bound to exist amongst ordinary people as well because after all everyone is ordinary until they achieve fame! And more people fail to achieve world-wide fame rather than succeed at it.

If “...suicide and fame might be connected through psychological characteristics present in the personality...” then there would be more people who do not achieve the fame even after striving desperately for it, and so this self-obsession should exist in their personalities too, as in the personalities of non-celebs. If anything, rich celebrities
have the resources to battle depression. And who is to say that famous people are self-obsessive?

Coming to Amy Winehouse’s hand, there is nothing extraordinary in the hand shape but there is a disproportionate development of the lower side of the mount of Luna or Moon and a headline plunging straight downwards. This itself tells a story, and it was lucky to get such a clear picture of her hand.

Check out the hand photograph here. The photo of her below is a free one. 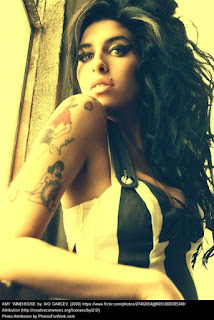 There appears to be a Girdle of Venus present on her hand as well, and there is a line joining the heart and headlines. Then there are those sensitive pads on the tips of her fingers, a slightly thick top phalange of the thumb, fingertips which are slightly conic in shape and a slightly bent little finger.

These features in combination do not show a balanced hand. Such a hand shows a person who is very imaginative and creative, but secretive, and with a dark side and also very emotionally sensitive.  It shows a person who lives in her own world, and it also shows a lack of self-control and obsessive behaviour. It is not at all surprising that Amy Winehouse had problems – she died of alcohol poisoning.

Her addictions were certainly self-destructive, and some would go so far as to call them suicidal, although there is no evidence that she committed suicide.

One cannot help but wonder that if a person such as Amy had not been successful, but had remained ordinary and middle-class even after years of struggle, would she have met the same fate? Would she have had access to so much alcohol and luxurious, private accommodation? Wouldn't she have listened more to those who loved her if she had been a failure? Wouldn't she have been more emotionally dependent on them? One will never know, although a good picture of her passive left hand will help in understanding how fame changed her.

Two singers who committed suicide: Chester Bennington and Kurt Cobain and these two posts could give you a clue as to why they did so.

Or Is Justin Beiber as innocent as he looks?