Ben Affleck has a beautifully shaped hand, with long slim fingers, some of them waisted, a very broad palm, one of the largest I have seen. The mounts are not too heavily developed, and the mounts which are well developed are Venus and the Mount of Moon, specifically the Upper part of the Moon Mount. The thumb is also waisted, a little low-set and longer than normal. All of this points to a finely balanced, generous, unselfish, compassionate, and warm person with strength of character and besides,
this shows a high level of creative imagination and a love for music. Check out a hand photo of his here. The photograph published below is a free one.

The shape of the fingers shows Affleck’s attention to detail and discipline. It is not surprising that the man is directing films.

Ben Affleck’s Headline is not as good as his Heartline. The Headline appears 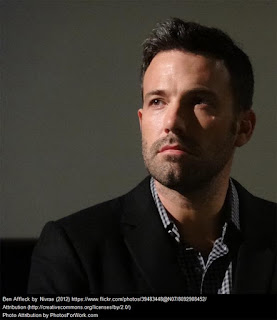 uneven, and either starts late or is joined for a bit. This shows that he was cautious and/or too sheltered or dependent in the earlier part of his life, something which he has still not got over completely. This is compounded by the fact that his Jupiter (index) finger is shorter than normal on both hands although on the right active hand it is not so low-set. This shows the self-esteem problems which he has tried to overcome. While there is no doubt that in terms of self-development, Ben Affleck is progressing, he would still have issues. The uneven Headline would make it harder for him to resolve inner conflicts because it shows unsteadiness of ideas. Right now he is going through one of the most materialistic phases in his life, but his thinking is likely to change.

His Heartline shows that he is a person who can become a hundred per cent emotionally engaged with his work and in relationships, and it is probably due to this that he often makes decisions based on his heart rather than his head. His heart tends to think better and more steadily than his head does! Even then there is some evidence of repression of his inner feelings shown in the setting of his Heartline.

In relationships, Ben Affleck’s sensitiveness can at times be too much to handle and also he may try too hard to please at times. It is not just emotional sensitiveness but an overall sensitivity to surroundings. All this makes him more vulnerable to being hurt and he may not always express his deepest needs.


You might also like to read about other internationally famous actors like Hugh Jackman, Johnny Depp or Tom Cruise or movie stars like Julia Roberts or check out the hand readings of all other Hollywood personalities on this website or check out the hand readings of Music Stars like Justin Beiber or Kurt Cobain and more!
You can also click any of the labels below this post to read related posts.