Asaramji Bapu's hands tell us of a strong and wilful personality with a high level of alertness, tact, intuition and shrewdness. He would also possesses good judgement of people and he is action-orientated and quick as well. Is he a good Guru? Palmistry can have a few answers for us.
He has strongly etched lines, well-developed mounts like that of Venus and Mercury, and a long thumb with a long first phalange. The finger of Mercury (little) is also long and the heartline is deep and well etches, ending on the Mount of Jupiter in both hands. His head and heart lines are both good. The heartline is straight, touching the Jupiter mount and possibly has a short parallel supporting line at its end. The headline is widely forked, the top fork going upwards. The thumb is slightly low-set.
Check out his hand photo here. 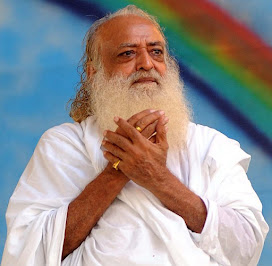 It was not possible to confirm whether he writes with his right or left hand as no photos of this were available on the net although there are photos of him holding things with his right hand Thus, I have used my own judgment to come to the conclusion that he is right-handed. It is very likely as the headline on his right hand is better suited to the profession he is in, rather than the headline on the left. His head and lifelines are joined considerably at the start, on both hands. The lifeline is more outwards on the right hand, sweeping across the Mount of Venus, increasing the width of the mount.
What his hands show is that he is a self-made man who managed to develop the qualities he believed necessary to fulfil his goals in life. His hand shows increased concentration and focus (probably due to meditation). Clearly, Asaram Bapu developed his mental qualities from what he had inherited. He has deep feelings, although at heart he is diffident and introverted. He also reached out to people in a big way as he grew older. He does have a humanitarian approach, and he likes people and has the ability to understand and connect with them, but his hand also shows a person with a strong desire to get his way at all costs.

The worrisome aspect is that his hand shows that he is the kind of person who shows a different face to the public, very different from what he is inside. It is a kind of “professional front” that people often have – two personalities, one for the office and one for the personal life. Often, inner feelings are disconnected from the outward facade, making the person almost believe he is also the other.

This kind of personality usually means that there is suppression of one's personal needs and deepest feelings. It’s hard to know such people’s deep and inner feelings and at times it could mean that they are struggling to know themselves, and know who they really are. Yes, this can mean some element of confusion. Certainly, a dichotomous nature is present. And his hand also shows someone who could behave illogically if emotions are aroused and he can be manipulative as well.

To sum up, from the shape of Asaram Bapu’s hands and fingers one can say that he has an idealistic, imaginative, and philosophical bent of mind. There is a liking for the comforts of life. He has compassion and love to give, and this can make him a believable guru, but the problem can be self-control, in addition to the other weaknesses of character.

Update on 28th August 2013: After the rape charges against him a reader wrote to me asking me whether he raped the young girl. This cannot be told by the hand, although whether he is of a criminal mindset can be said. Asaram does not have a criminal mindset, nor does his hand show a high sex drive. Sensualism is shown though, and also a very wilful personality. When it comes to the crunch he is capable of doing anything. This is a man who will do something if he feels like it, even if rational thought demands that he should not. This does not mean that he would rape. That cannot be seen from the hand. But his hand does not rule it out.

You might also like to read what the hand says about the personality of another Indian guru who is under a cloud: Swami Nithyananda.

Or read brief character sketches of Jaggi Vasudev (Sadhguru); Nirmala Devi; Osho Rajneesh; Sri Sri Ravi Shankar; Mahatma Gandhi; Sai Baba or India's revered ex-president, Dr Sarvepalli Radhakrishnan, and many more! If there is any particular guru you want to know about, just type his/her name in the search box and you might get lucky! Or write to me to request a hand reading of your favourite celeb!
You can slo check out the differences between the gurus of yore and the modern gurus: The hands of Swami Sivananda Saraswati of Rishikesh and Swami Chidananda
And many more! Just go to the label Spiritual leaders. Here, you will also find personality readings of gurus and spiritual leaders from different parts of the world including the Pope, the Ayatollah, the Dalai Lama, Mother Teresa.
(Free photo of Asaram Bapu on this post from the wiki: by Unique Trooper / CC0)