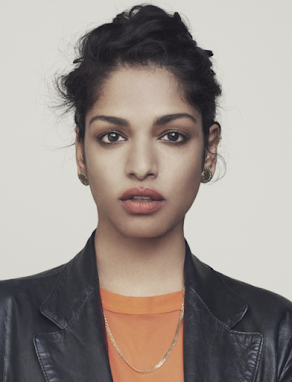 The most fascinating personalities are those who have changed because of their circumstances. And this can be made out by comparing their left (passive) and right (active) hands, assuming that they write with their right hands. In the case of the music star and British-Sri Lankan rapper, Matangi M.I.A. (also known as Maya)*, it is so. Generally speaking, this would indicate an unusual (and at times tumultuous) life, emotionally speaking at least. Considering she was a Tamil refugee from Sri Lanka to the UK, it isn't surprising that she led an eventful life which impacted her character. The active hand (the writing hand) reveals the current self, while the passive shows the subconscious or the inherited personality.

Mathangi has longish fingers and a longish palm, and this shape points to a sensitive, vulnerable, and intuitive person, a person for whom feelings are important. Her heartline is strong, on both hands, and this fits in
with her overall persona as shown by the hand shape. Loving, loyal, with a good balance of responsiveness, compassion and romanticism, that’s who she is.

Check out her hand photographs here, and here. Unfortunately, better photographs of her right hand are not available on the internet.

What one can see on her right active hand, is that the headline is longer than on the left, and this indicates striving and it means that she has developed herself with the strength of her own merit. Her capabilities have been enhanced over what she inherited. This change also points to a better grip on reality, a better ability to cope, and more consistent thinking. However, the heart could still dominate the head a wee bit as her headline is not as strong as the heartline.

Moreover, the headline on both hands is uneven (more so on the passive hand), and this points to a person who is changeable, and this is likely due to strong emotions/feelings and also due to lack of rootedness (note the end of her lifeline). It also means that at different periods in her life, there have been significant changes in thinking, and this is shown approximately around the age of 30, and then in the late thirties. Her personality is different in her childhood, adulthood, and later, after the forties.

The fingers are well-shaped, straightish, tapering, with squarish tips on 2-3 fingers, the first and second phalanges of the fingers are good, and the palm though long, is large. These features indicate a good balance of intellectualism and pragmatism. Her mind/creativity will be in tune with what the market wants, what reality demands.

Analytical thinking and diplomacy accompanied by a straightforward nature is a part of her personality.

With a strong purpose in life and a consistent approach, she can achieve a lot in the second half of her life.

Or you can check out other hand readings of music stars: Lady Gaga, or Beyoncé Knowles or Miley Cyrus or Rihanna or Jennifer Hudson  Justin or Maddona.

Also, check out the hand analysis all other musicians and singers under the label of "Music Stars" or check out the hand readings of Hollywood actors, including those of British origin.
(Free photo of MIA from Interscope Records / CC BY-SA [https://creativecommons.org/licenses/by-sa/4.0])
Posted by Nita at 7:04 AM