Swami Nithyananda's hand is not very good if one compares it to the hands of other famous (or successful) people and really bad if one compares it to other gurus. His hand shows average, if not weak, willpower. In addition, his hand shows that he is more than ordinarily selfish, although not narrow-minded.
Of late he has been embroiled in scandals and the question is: Is this type of behaviour shown on his hand?

The answer is a resounding
yes! Even though there are few decent photographs of Nityananda's hand available on the internet, some aspects stand out. 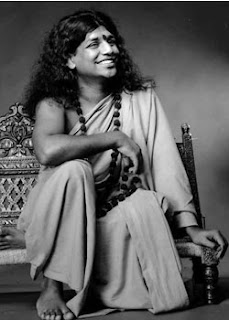 The Mount of Venus on Nithyananda’s hand is developed but more so the Mount of Moon. Ordinarily, these are not bad signs as they show strong passion, a love for people, a sense of music, and a restless, imaginative mind. However, when these signs are combined with others the result can be bad.
This is the case with Nithyananda.

His hand has broad fingers, with thick third phalanges, conic tips to the fingers, and a long palm. The fingers seem relatively short. The lines on the palm are dark and a little thick and the heartline is long and curving up to the base of the fingers (almost) and the headline is sloping downwards. The thumb is a little high set and closely held, nearer the palm.
His hands show a love of luxury, comfort and seeking pleasure; the physical self is important. These characteristics in themselves do not necessarily make a person's behaviour questionable as long as the hand also shows a strong will and high integrity.

Unfortunately, Nithyananda’s hands do not show a strong character. Instead, it shows subjective thinking and idealism which would make it him stick to his own point of view. His hand shows a vivid imagination as well and yes, creative thinking But it also shows narrow-mindedness shown on his hand as well as secretiveness. Inherent selfishness is also shown.

While the hand cannot show events or actions, it can show the potential to do dodgy things. This does not mean that he is evil although his hands show self-seeking behaviour and less control. People with this kind of hand often live normal lives and do normal things. Why did Nithyananda do things are another level? Well, he does have some charm and charisma and he used this in an opportunistic manner as he was ambitious. Finally, it depends on one's opportunities.

It is said that Nityananda has helped many people with his lectures and guidance. Well, his heartline is good, in the sense it's fairly long and curving and deep. This shows the capacity to love. And he does like people. However, whether he is a wise and kind man or not, the factor that drives him is not altruism of any kind. And for a guru, this aspect of character is important.

Read the hand analysis of other Spiritual Leaders on this blog and also see comparisons of the hands of different gurus, particularly that of the ancient saints and the modern godmen.