Jawaharlal Nehru was not a weak leader

Jawaharlal Nehru, India's first Prime Minister, does not have an extraordinary hand but his hand shows a good mind, a strong will and warmth of personality. There has been criticism about how he handled his job, particularly the 1962 skirmish with the Chinese.

What kind of a man was Nehru? Born into a wealthy, political family, he was catapulted into the position. Did he deserve it?

Nehru's hand is rather fleshy, with well-developed mounts of Venus and Moon, as well as the Jupiter mount. Possibly the Mercury mount is developed too, but with not too many photos of his hands on the net, could not confirm this. The Mars mounts are reasonably developed and the fingertips are rounded, and the Jupiter (index) finger distinctly conic. Nehru’s fingers are evenly balanced in length, with slightly thick third phalanges and long first phalanges. His Mercury (little) finger is longish and slightly bent, and possibly the index finger is also bent a little. He has a strong,
outward-facing thumb and sensitive pads on the tips of the fingers. The Jupiter (index) finger is high-set, and the Mercury finger, low-set. Nehru does not have a particularly long heartline or headline as can be seen from the photos, but nor are these lines short. The heart-line is low-set.

You can see a hand photo of his here and his handprint here. 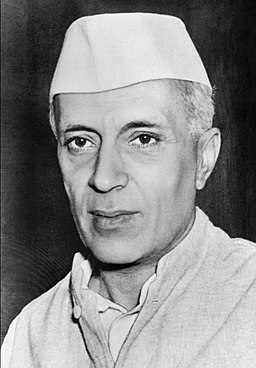 All of these hand characteristics point to a man with a warm and passionate nature, although not one which is spontaneous. There were rumours of his affairs, or rather, he had an image of a playboy, but it is likely that Nehru never really gave in to his emotions fully. He was the kind of man who suppressed his true emotions and allowed his head to rule. In fact, he is likely to have had difficulties in intimate relationships. And he could well have been manipulative around women.

High ambition is seen as well as ego. These signs when combined with the strong thumb, can make a man autocratic, even headstrong. No doubt he had leadership qualities; he was not a man to shirk responsibility. And aggression and temper are not seen to be excessive, although present.

When it comes to well-known leaders of the past, those who have become legends and a part of history, it becomes difficult to change people's minds about the character of these leaders because people have already made up their minds. The best one can do as a hand reader is to see if the famous person’s known characteristics are revealed by the hand or not.

Nehru was known to be incorruptible, and well, there is nothing on his hand that contradicts this. His Headline does not show a materialistic mindset. In fact, his hand does not show an understanding of money, even if he was known to be economical. His hand is that of an intellectual and an idealist, not always practical, and writing ability is shown.

From an actual photo on the internet, Jawaharlal Nehru’s Moon mount is very highly developed, although this is not evident in the handprint which is available. This is very likely because the handprint is inaccurate, maybe having been cleaned up, resulting in a flat Moon mount. People with highly developed Moon mounts (especially those with a sloping Headline) are imaginative, with a brooding tendency. There is restlessness, sensitiveness and moodiness present in such a personality and this is accentuated on Nehru’s hand because of the other hand features. Ego in particular. He is likely to have suffered from feelings of solitariness and was probably was very sensitive to criticism. He is likely to have been physically laid-back, even if not intellectually.

As one does not have access to his left, passive hand, it is difficult to say whether these qualities were inherited or developed. One must not forget that Jawaharlal Nehru was born into a wealthy family, and there is no doubt that his privileged background, access to the best education, and more importantly, his father’s political position, played a part in Jawaharlal Nehru becoming PM.

This is not to say he was unworthy. Not at all. Nehru's hand reveals that he was above average in intellect, canny, with leadership qualities and idealism. A higher dose of pragmatism would have helped.


Here are the hand Readings of other senior Indian Politicians:
Hand Analysis of Sonia Gandhi or Hand analysis of Lal Krishna Advani or Mamata Banerjee's hands tell us about her character or Do Narendra Modi's hands show his complicity in the Gujarat riots of 2002? or What P. Chidambaram's hands tell us about him or Prime Minister Manmohan Singh's personality characteristics or Mayawati's hands reveal her personality characteristics or The Hand Analysis of Nitin Gadkari, the BJP President or Nitish Kumar's Hand Reading.

For the younger lot of Indian Politicians and also international names check out the complete list of readings under the label "Politicians."