Priyanka Gandhi's hands show that her personality is that of an independent-minded and compassionate woman but she is not all that she appears to be. She is no wimp! Narendra Modi called her “gudiya” once, and he couldn’t be more wrong. This woman is no doll. She is nowhere on India’s political scene at the moment but the truth is that she is an heir of the Nehru family and knowing how dynastic Indians are, one never knows when this Gandhi scion might enter politics, that too starting at the top.
Does she have the character to do any good for India? Is she suited to politics? Scion or not, if she is right for the job then she deserves a chance. 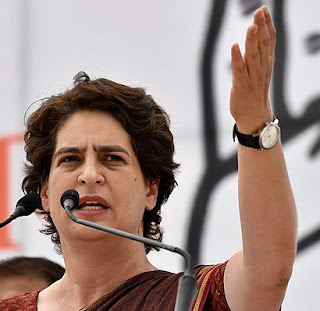 independent thinker, but not so much so as to make her too individualistic, and
that's a good thing.
She has a very long thumb, and one cannot help but think that it must be an inheritance of the Gandhi family, although neither Rajiv Gandhi nor Rahul Gandhi’s hands have such thumbs. And nor did Jawaharlal Nehru did not possess this kind of thumb either. So it is likely she inherited it from Indira Gandhi.
The thumb is also low-set although it loses a lot of its power as it is held close to the hand, in Priyanka's case and it is also conic in its tip.
Priyanka Gandhi Vadra has a longish hand, with a long palm and long fingers. She has a bent and low-set Jupiter (index) finger, a strong Apollo (ring) finger, and rounded/conic tips on the fingers. The finger of Mercury (little) is also bent. The second phalanges of her fingers are good, first phalanges average, and the mounts of Venus and Lower Moon are developed. Both her heartline and headline are long, and curvy. The headline is long, more so as it's sloping and almost goes to the edge of the palm.
Check out a photograph of Priyanka Gandhi's hand here or here or here.

No doubt that her hand shows some leadership ability as it shows generosity, sympathy, and understanding of what it takes to control people. However, love of liberty is not shown and she is also a closed, private person, like Sonia Gandhi, her mother, is. This takes away from the leadership quality. But Priyanka can complete any mission she wants to, and direct her energies towards a specific goal and this can be altruistic, to help others. She genuinely feels for others. However, her hand shows that she is headstrong and controlling as well. She wants her way at all times.
It is not at all surprising though that Priyanka Gandhi forgave her father’s assassin. It wasn't a publicity stunt, though it felt like one. Her hand shows that she is capable of this kind of compassion. Oddly enough, this does not mean that she is forgiving in her personal life; it means she has a humanitarian outlook and has the ability to forgive the terrible wounds that have been inflicted, even if she has been the victim.
One is not sure why she stepped aside for her brother Rahul but maybe it was because that she is not a selfish person. Or perhaps others thought she is not suitable for the top job. Her hand shows that she is also quite sensitive and impressionable, more than the average person. She was likely a better candidate from the point of view of capability but temperamentally she may not be suited to be the leader of a democratic country.
Priyanka's hand does not show arrogance. In fact, she might actually be a little diffident. However, she likes the limelight and her comforts and enjoys status symbols.

She is idealistic and that's good because it means that she has some principles, but she is not a straightforward person, not according to her hand. She can be manipulative and quite righteous according to her own beliefs, and this can become a weakness. Also, she has a tendency to brood, be suspicious, and imagine the worst of others. She is more intuitive rather than pragmatic.

Priyanka's hand shows that she is fairly clever and shrewd, even if not intellectual, and she also has the ability to use the right words at the right time, and this can work to her advantage. Being manipulative is not a disadvantage for a politician, and in fact, most politicians possess this characteristic, at least in India.
Temperamentally, Priyanka's disposition is such that she is not suited to a politician’s life. She is too sensitive and a private, closed person. Her hand does not show managerial or executive ability which means she will have to depend on others to get things done which can make a leader susceptible.

She does have the potential to do great good, and she has the will and personality to command others, but her personality is such that she could surround herself with sycophants.

You might also like to read Robert Vadra's hand reading or read about Priyanka's brother Rahul Gandhi:
What do Rahul Gandhi's hands tell us about his capability as a politician?
and also the Hand Analysis of Sonia Gandhi, their mother. Check out what Rajiv Gandhi's hands say about him. The analysis of his hands explains what made him tick.
Or perhaps you would like to know more about the personalities of other would-be politicians like Kamal Hassan.
You might also like to see hand readings of other Indian politicians like Pranab Mukherjee or Akhilesh Yadav. Or read about many more political personalities from all over the world, by clicking this label: Politicians.