King Charles is the kind of person who likes to get things done and likes to see things through to the end. His hand belongs to a person who can get impatient with delay. He is a doer. Active and energetic. All this is evident from even a quick glance at his hand. His hand is fairly easy to read as some of the signs are obvious. Thick fingers, slightly on the shorter side, hand too on the shorter side, and also deep pink in colour, with strong mounts.

But what does this kind of hand show about the Prince as a man? What is he like from the inside? Well, it's not all good. 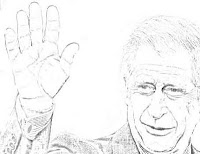 You can check out hand photos of him here and here and the left hand here.

Prince Charles' hands and nails show his energy, but they also show him to be temperamental and hot-headed. The conic tips and the strong Mounts of Mars accentuate this trait. He is certainly not the kind of man one should cross! Temper, aggressiveness and the ability to resist and hang in there – he has it all. His thumb is good too and shows his strong willpower and stubbornness.
His hand has a broad palm, shortish, thick fingers and a hand which is reddish in colour, and possibly a little stiff. The third phalanges are thick, especially of the Apollo (ring) finger, Mercury (pinky) and Jupiter (index) finger. The Venus mount is well developed and the Jupiter (index) finger has a conic tip, with a longish first phalange, and the life and head lines are joined quite a bit. The heartline is long, curving up to the mount of Jupiter.

His nature is such that he likes to solve problems, not just think about them. Neither will he like to wallow in misery. He will take quick decisions to make things better, and act on them. In this, he can at times go to an extreme. He is the kind who can be so busy executing his plans that he may neglect to notice that he is breaking a few rules or that he has not gone into the details of his plans.

A good man
However, King Charles will never be petty or mean or vindictive, although he may hurt people with his bluntness and some stinginess is shown. He can be set and rigid in some ways, and cautious as well, but he has a big heart and will be able to see things from an unselfish standpoint. He believes in a higher cause and there is some feeling of doing for others.
There is a love for humanity and he has some charisma as well. He is idealistic in love. Overall, though, Prince Charles is a warm and solid person. He is the kind of man who will never be driven by the love of money, but his weakness is that he is driven to a large extent by a need for appreciation. If he doesn’t get it, he will be an unhappy man. He is not the kind who will ever be happy to crawl into the woodwork and do his own thing, however important it is.

He likes to be dominant, but he is not a tyrant by any means. What saves him is a big heart, and a kind and just nature. There is a need to make every penny count, however.

He is not what he was born with
What I found most interesting about the King's hand was the way some of his inherited traits have changed due to his environment. He was born a serious person, very focused, with an ability to be studious, but something in his environment altered him. This is one quality which is hard to change. He has a strong Saturn finger on his left hand (which shows the qualities he was born with) but it is weak on the right. In fact, any change in the shape and size of a finger on any hand is significant. If one takes into account other traits which have changed, the conclusion one comes to is that Prince Charles was brought up with the idea that he needn’t ever do anything on his own. Today he lacks a strong tenacity of purpose and there could be some scattering of his energies. A pity, because with his noble ideals and strong will, he could have achieved anything he set his mind to and become excellent at it.

He has also become more proud, although the dominant nature is inherited. King Charles may not have ever been exactly humble as a child, but he was never meant to be as proud (arrogant?) as he is today. He was born with a normal dosage of the qualities of pride and righteousness and honour but today these qualities are out of balance. That is what a royal upbringing can do to one!


The future?
Only a detailed study of his lines can tell of future trends. But from whatever little I see from his lines, it is clear that he needs to be careful about his health. His hand shows him to be the kind of person who will tend to push his body to the limit, whether it be over-exerting himself in physical activity or not taking care to control his diet. He enjoys his food and drink and likes the pleasures of life a little too much.

(The sketch is by me)