Prince Harry – is he the better brother? 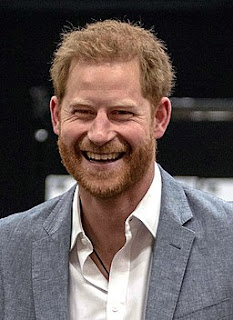 After Prince Harry called himself a “spare” he put into words something no prince before him ever had. What with his book and the tv series – Harry and Meghan – there has been more controversy about him than ever before. Despite the publicity that Prince Harry has generated, if news is to be believed, it’s his elder brother, Prince William, who is winning the PR war. But who is a better person – Harry or William?

Both have similar shaped palms, squarish, but the fingers are a little different, with Prince William’s fingers likely to be a little shorter and thicker. However, both have long

Mercury (little) fingers. William’s thumb is definitely different – thicker and the first phalange of his thumb is longer. Prince Harry has a stronger finger of Saturn (middle finger) and it’s slightly bent. Prince William’s Saturn finger is a little short and most likely only the first phalange is bent. Harry’s Jupiter (index) finger is bent, but not William’s. Most important. Harry’s fingertips are more conic as compared to William’s, whose fingertips are more rounded. Prince William also holds his middle two fingers closer together while Harry keeps and even distance between all his fingers.

You can check out Prince Harry's hand here.

Prince William has a better headline, though not too long – it starts on the mount of Jupiter or its base, is joined just a little with the lifeline, and is fairly even, sloping gently towards the Moon mount. Prince Harry, on the other hand, has his life and headlines joined quite a bit, far too much in fact. And his headline a little wavy too, although this is not seen on Harry’s left, passive hand. (The passive hand shows the inherited/subconscious personality while the active hand shows the current, active one. As William is left-handed, his left hand is the active one.)

When it comes to mounts, the base of both their hands is developed, more so the Moon and Venus mounts, but Prince Harry has these mounts more developed. Overall, Harry’s mounts are higher. When it comes to the Venus mount, William’s is kind of normal though it’s not wide, but Harry’s Venus mount improves as he grows older. Both brothers have the Jupiter mount developed, and the quadrangles are a little narrow at some point.

These hand features can give us a thumbnail sketch of what both brothers are like. Prince William’s hand has already been talked about on this website, and this post is more about Prince Harry.

According to his hand, Prince Harry comes across as an introverted, shy and diffident personality, whose thinking seems to have changed in childhood (which we can attribute to his mother’s death). His thinking is not too steady and over time, it likely changes quite significantly, and yes another change is coming. Harry is also the brooding type, he nurses his wounds. As he grows older he will come out of his shell because he is serious and more focused as compared to his brother William about what he wants to do in life. He wants to do something and is definitely talented.

Harry has a fairly gentle and soft personality, while William can be unreasonable and there is evidence of temper. However, William is a clearer, better thinker when it comes to the crunch, and is definitely quite street-smart. When it comes to actual ability, it is Harry who wins. He has more focus and a better understanding of how to make life work. Perhaps this is because he believes he has been thrown to the wolves.

Both the brothers have a keen sense of people, and an understanding of them, and they can fairly accurately evaluate situations and people, although they tend to see things from their own perspective. The main difference would be in their reactions to what they perceive. Harry being more sensitive and more idealistic would therefore react in the opposite way as compared to William, who has a more practical approach to most things. Idealism is quite a strong personality trait with Harry, and this colours his approach to everything. He could stick to his beliefs no matter what.

So who is the better human being, the better brother? Prince Harry or Prince William?

Well, if one believes that sensitiveness, shyness, imaginativeness, introversion, seriousness, and idealism are better qualities than being pragmatic and clear-headed, then Harry is the better person. True, he is busy airing his dirty laundry but it's more because he is lashing out...or acting out, not because he wants attention. Maybe this is his way of healing.

William is the more straightforward person, and simpler at heart, while Harry can be more manipulative. This is something he could have learnt, to survive, after his mother's tragic death. Despite, this, Prince Harry is most likely to be the loser, as people like him often are. But you never know. No one can predict the future.

Read about the personalities of other Royals like the Princess of Wales, Lady Diana; Kate Middleton; Prince Charles or Meghan Markle or Prince William or read the hand readings of Royals from all over the world.

Or you might want to check out all the personality profiles of famous people from the United Kingdom.