The hands of Gautam Adani 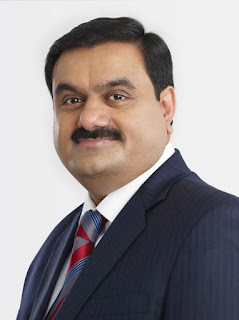 According to Wikipedia, Gautam Adani is said to be the third richest man in the world, and Asia's richest.

His personality has been described by many as visionary, risk-taking, hard-working, persuasive, and philanthropic. Needless to say, he also has a lot of business sense, otherwise, he wouldn’t be where he is today.

Does his hand corroborate these qualities in his character? If yes, what else does his hand tell us about his personality?

His hand has a long palm with a firm texture, and fingers which are neither short nor long, with rounded tips, but the Mercury (little) finger and the thumb have a slightly conic tip. The Jupiter (index) finger appears to be a little short and the most dominant finger is the Apollo (ring) finger. The phalanges (the partitions on the inside of the fingers) are important in evaluating any person’s personality makeup, and in Adani’s case the top phalanges, though not exceptionally long, are slim and tapering and a good length. The second phalanges are good too, with the Apollo (ring) finger’s second phalange being particularly long. The thumb, a little low-set, is long, with a good balance of its two phalanges, and it is quite supple as well.

The most prominent line on Gautam Adani’s hand is the heartline, although the lifeline is also quite well etched. The heartline is long, slightly curved, and just entering the Jupiter mount. The headline is a little sloping and though very well marked in the first half, it appears to be lighter in the second and at the start, it is joined with the lifeline. Overall, the hand does not have too many lines. The Moon and Apollo mounts are the most developed although Mars, particularly Upper Mars, is developed as well.

You can see his hand photo here.

Hand features should be read in combination because one strong sign can reduce the significance of the other.

To start with, Gautam Adani’s hand shows a lot of energy. He is action-oriented, and a thinker as well – a good balance of both these aspects of character.

However, he is likely to make emotional decisions and there is a tendency to be impulsive, and plus, there is some element of impressionability present. This does not necessarily mean that Adani will make hasty decisions. So far it has worked very well for him. Maybe because he has an intense desire for excellence. He is not the kind who would do any kind of slipshod work, and there is some cautiousness present. However, in the latter half of his life, he could let his emotions take the upper hand and he needs to be careful of that.

Adani's hand shows that although amassing wealth means little to him, he certainly wants to make a name for himself.
His risk-taking ability is very high. The entrepreneurship streak is evident in his hand. His hand shows a high level of creative thinking, which has been channelled into entrepreneurship. How one channels one’s creativity depends on one’s upbringing and the environment. Adani is the kind who likes to invent, and this is what could possibly make him a visionary which people say he is. However, Adani's hand shows that he does not have a set goal in life. He is doing what he enjoys. Which is to create, and he is flexible. One is not sure whether he knows where he is going. This is an odd personality trait in a businessman.

Adani has extraordinary marketing expertise, almost intuitive, and this ability has been developed (not inherited) and this is something significant. It reveals that he is a self-made person; he honed his skills all by himself. His hand also reveals some kind of humility of persona, or it could be an inner lack of confidence or a lack of arrogance.

Basically, Gautam Adani is an optimistic, charming, and lively person. Although warmth of personality is not present, he has the capacity to love deeply and would be devoted to his family even though he is not the demonstrative type.

His hand shows a philanthropic mindset.

Let us hope that he continues to use his abilities with wisdom, and not emotion, and continues to contribute to society.

Related Reading: The personality as seen from the hands of Mukesh Ambani, Anil Ambani. Or check out Ratan Tata's hand analysis or Laxmi Mittal's Hand Reading or  Vijay Mallya's hand analysis or Shiv Nadar's
Or you can read The Hand Analysis of Bill Gates and  Elon Musk
Or check out the personality characteristics of Businesspeople from around the world.
Free photo of Gautam Adani, CC BY 3.0
Posted by Nita at 12:21 AM