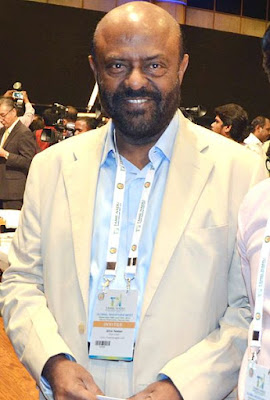 The most striking aspect about Shiv Nadar’s hands is his dark, deeply etched lines. There aren't too many of lines either. Also significant are his long Apollo (ring) and Mercury (little) fingers. Other hand features include a broad palm, well-developed mounts of Moon, Lower Mars, Jupiter and Venus and good first and second phalanges of the fingers. The thumb is a good length and the first and second phalanges are balanced. There is a good balance between the length of the fingers and the palm as well.

Shiv Nadar’s heart and head lines do not appear to be very long although they seem to have lighter extensions. Without seeing these clearly, it is difficult to draw conclusions about this. Nadar's headline is considerably tied to the lifeline. The Sun/Apollo line is not as prominent as the main lines, busting the myth that

Today, Shiv Nadar, the founder of HCL, is worth 27 billion and is the richest IT billionaire in India and the third richest in India.

Does this mean that this reading will not be accurate if Nadar turns out to be left-handed? It would then make his right hand (on which I have based this reading) Nadar’s passive hand. The passive hand shows a person’s intrinsic qualities which are present at the subconscious level. The active/current personality could well be quite different.

From my experience, successful people have better lines on their active hands (the hand they write with) as compared to their passive hand. This is particularly true of self-made people, like Shiv Nadar, who became an achiever due to his own hard work and perseverance. There were no decent pictures of his left hand so this cannot be verified. It doesn't matter, however, because as all it would mean is that the qualities described in this post are his inherited or subconscious qualities – if he is left-handed. His left hand, in this instance, would be even better.

What Shiv Nadar's right hand shows is a clear mind, strong ambition, imagination, aggression, drive, energy, and a burning desire to succeed and make a name for oneself. Excellent business sense is shown but this hand is not that of a money-making machine. Shiv Nadar is a thinker with a creative mindset. This is the hand of a person who is a doer as well as a thinker and who possesses will power backed by logic. He has an uncanny understanding of situations and people, almost intuitive. Yes, there is a great drive to succeed but no greed. And at heart Shiv Nadar is a humble man.

No doubt that the owner of this hand is a remarkable person, successful and driven. But Shiv Nadar is more than just successful, isn’t he? He is a star of sorts because he is a self-made billionaire. One of the greatest entrepreneurs of our time and one of the richest men in India. So where is this shown on the hand?

Perhaps it is indicated by the fact that his Fate or Saturn line appears to sprout from his lifeline. Many people have lines rising up from the lifeline and going upwards but rarely do these lines go right up to the mount of Saturn to become the fateline. Most such rising lines from the lifeline stop below the headline. A line that starts from the lifeline and goes up to the mount of Saturn is unusual. One of the interpretations of this sign is that it belongs to a self-made person but this does not mean that all those who have a fateline rising from the lifeline are on their way to becoming extremely rich or powerful. That depends on the other features of the hand. Another thing – not all self-made people have such a fateline. This aspect can be seen in other places on the hand.