Kate Middleton and the hands of the British Royals

Does Kate Middleton, Duchess of Cambridge, fit into the royal family of Britain – temperament-wise? Are her values similar to that of the royal family? If one compares the hands of various members of the Windsor family, then the answer is more of a yes rather than a no. Although Kate is temperamentally different, there is a similarity, especially if one thinks back to how at odds Princess Diana was with
the Windsors. Princess Diana’s hands show her to be markedly different from the photo comparison of the hands of the British Royals. Also, check out Kate's hand photograph. In these photographs, you can at once see how differently Diana's hands are shaped as compared to the rest of the 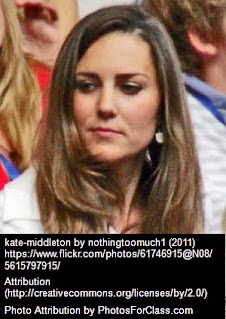 Windsor Royals and such large differences do not result in happy marriages. In this post, I will explore briefly the similarities and differences between Kate Middleton and her husband and in-laws.
Kate has a long Mercury (little) finger and the other fingers, rounded at the tip, are normal in length. Her fingers are medium length, as is her thumb, and the first phalange of the thumb is balanced with the second. The thumb is not too long. The Jupiter and Moon mounts are most developed. When it comes to the phalanges of her fingers, those too are normal in length. Overall, her hand shows a balance of personality. The Venus mount is not that developed. The mounts overall seem less developed, if one compares her hand to the Windsors. The heartline is a bit low-set.

Similarities with the Windsors
Kate’s broad palm (although her longish hand does take away from it) is similar to the shape of the palms of her in-laws and that of her husband Prince William. Her headline is fine and balanced, broadly similar to that of William. Her fingers are fairly straight with a good medium-set thumb.

What this means is that intellectually she is suited to the Prince and shares a similar worldview. The breadth of vision and common sense are the qualities she shares with most members of her husband’s immediate family. Kate is more broad-minded and reasonable than her father-in-law Prince Charles, but equal to her husband Prince William in these qualities. People like her and William usually get along with a diverse bunch of people, because they are sensible and pragmatic. Kate is also straightforward, direct and discreet (like other members of the royal family), and also a little timid, and these qualities would likely endear her to them.

Kate Middleton and Princess Di
Kate Middleton’s hands are markedly different from Princess Diana’s. They show that she lacks Diana’s deeply compassionate and philanthropic nature, but then so do her Windsor in-laws. The Royals may be good people, but Princess Diana had an exceptionally developed humanitarian outlook which none of them possess. If one goes by hand reading, then it is highly unlikely that Diana, who was more of a romantic soul, could have connected with her daughter-in-law Kate at a deeper level. Kate’s hands show her to be a very smart and savvy person, unlike Diana.

Differences with the Windsors
What makes Kate Middleton different from the Windsors is her calmer nature as compared to their hot-blooded one. In fact, Kate can quite distant and cold on occasion, although she is the nervous type. The nervousness is compounded by inner timidity. Money and position are very important to Kate Middleton. If her hand shows her to be more materialistic than the Windsors, and Princess Diana, nothing wrong with that. It could be due to her down-to-earth and straightforward nature. It is surprising that Meghan Markle is called a gold digger. because Meghan was rich and famous before she met Prince Harry! If Meghan is a gold-digger, then Kate is far more, relatively speaking. Kate may be uncomfortable with adulation, but she likes money and comfort.
But it must be said, that her hands show her to be ordinary in many ways. her strength of will is not remarkable, and she lacks leadership qualities and therefore it is unlikely that she could have been successful in anything except being who she is. She has found her vocation.
She does not have the ability to gather people around her. Charisma is not shown on her hand. Also, she is not people-oriented, and what this means is that she does not have a great love for people in general and in this she differs from the Windsors. If she is seen smiling and waving, she is pretending, and it is likely it's a strain on her. This is not who she is.

More about Kate
Unlike some other royal wives, Kate is less temperamental, well at least compared to the royal family members. She can hide her feelings and perhaps there is some emotional suppression. She is not short-tempered, but she can be irritable and at times, moody. However, she is sensible and knows what she wants. She has a very good chance of keeping out of the tabloids, although nowadays even a breath of a scandal is enough for the tabloids to go on overdrive.
Read the hand analysis of other royals like Kate Middleton's husband Prince William or The hand analysis of the Princess of Wales, Lady Diana or The hand analysis of Prince Charles (now King) or Prince Harry and Meghan Markle, or check out the hand profiles of famous people from the United Kingdom.
You can also check out the hand of British politicians like Rishi Sunak, Gordon Brown, David Cameron, Boris Johnson. Or perhaps you would like to compare the two greatest women politicians of the 20th century: The difference between Indira Gandhi and Margaret Thatcher