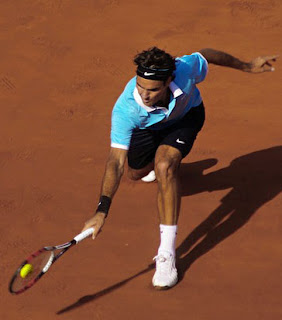 Roger Federer is an enigmatic personality for many. His hands can give us a clue as to what kind of a person he really is. By nature, he tends to be complex; a person who seems calm and controlled to the world, but is he really like that on the inside? Skilful and talented he surely is but, in reality, he is vulnerable and soft inside.

You can check out some hand photos of Roger here or here.

His handshape is a good one, showing balance or personality and that is probably why he has been able to function so well and control any extreme traits. His breadth of vision, balanced mind, common sense, thoughtfulness and reasonableness, all have helped keep him on the straight and narrow path.

A person is but a mix of various traits and if personality traits balance each other out it works out fine. If not, there can be trouble.

Roger Federer has a few personality weaknesses. While he is prudent, cautious and dependable, he can be altogether too serious, often becoming cynical. He was always the serious sort (born such) but this tendency has intensified over the years and this must be because he took to professional tennis at a very young age. This must have deprived him of the carefree life that many teenagers have. Being very serious and focused is an excellent trait, but it can be taken to an extreme. Not that Federer cannot enjoy himself. His hand shows balance and besides, he has a great partner, Mirka, who is a support to him.

His inner mental strength is limited and this means that he can suffer from anguish and self-doubt, become disheartened, and can find it a little hard to hold up emotionally during bad times. This means that he may not put in enough effort at all times in his life. No one likes to lose, but Federer takes it worse than most. He may not always show it, but he feels very upset when he loses and often directs his anger at himself. This trait does not combine well with the seriousness in his disposition, because it makes him see situations (and also himself) in a far worse light than is actually the case. In other words, he can lose perspective and cynicism, defeatism, and even bitterness, can take over.

He has good discipline and control and can get into the details, plan and analyse, although he is not interested in the mundane part of life which means daily living chores for example. When it comes to his work, he would have a systematic approach, wanting to take care of all loose ends, study and analyse, and ensure that he does not overlook anything.

Federer is a pretty shrewd guy and can be tactful and persuasive. Dependable and reliable, his hand shows talent and a high level of skill. His physical skill is to a large extent dependent on his mental skill, because of the way he thinks and plans. If he has been successful it is not just because of his hard work and skill, but also the way he thinks and also the enormous discipline and focus that he has.

He is a good human being, even if he is cynical. He does not seek money, but he does seek fame and name. Excellence matters a great deal as does winning. That is what makes Roger Federer who he is. He is not interested in showing off his wealth and is least interested in status symbols. If required he can lead a simple life. He is not stingy at all and is, in fact, a warm, passionate person who likes people. He is not stubborn although he can be a little inflexible at times.

Related Reading: Are Roger Federer and Mirka compatible?
Check out Rafael Nadal - Hand and Finger Analysis or Hand analysis of Venus and Serena Williams and read about Maria Sharapova or Novak Djokovic. Or read all the hand readings labeled Tennis.

Also, check out the hand readings of other international players and Sports Stars from different fields like that of David Beckham and Cristiano Ronaldo.

(Free Image by roby0059 from Pixabay)