The secret of his success
Success depends a great deal on personality and Tharoor (currently Minister of State for External Affairs) has a strong personality. His above-average willpower, strong dominating will, ability to command others with a purpose, as well as good reasoning powers, judgment and common sense are all seen on his thumb. In addition to this, 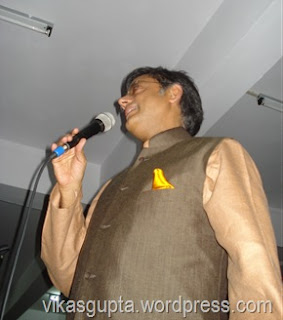 his thumb shows excellent executive and managerial ability. This in combination with a strong will shows a person who is efficient and capable. This indication is further strengthened by his headline, good Jupiter Mount, strong Jupiter (index) finger, and the seeming elasticity and colour of his hands. The first and second knots (as well as his headline) on the fingers add deliberation of thought and analytical ability to his character.

You can check out some hand photos of his here. (The photo above has been taken with permission from the owner)

Hand Features:
He has a good Jupiter (index) finger and it is balanced with the Apollo (ring) and Saturn (middle) fingers in length which shows a basic balance of personality. The third phalanges are long and slightly thick and the first phalanges are long too. The second phalanges of his fingers are likely a little short. He has a supple thumb which he holds close to his hand, a flat first phalange of the thumb, square tips and headline. The headline on his palm is clear, long and fairly straight. His Mars mounts are developed and the Mercury (pinky) finger is low-set and possibly just average length especially when compares it to his other, fairly long fingers.
He tends to be controlling and arrogant to the extent of being a bully. He has the ability to dig in his heels and not give up and he can be attention-seeking and worse, set in his ways. He is a tough nut to crack. These qualities of personality can be very good, they can be qualities to admire, these traits like mental toughness. When combined with some of his other character traits, it can make him a formidable adversary. The disadvantage is that he can become very difficult.

However, he is saved from becoming pig-headed and unreasonable by his basic flexibility of nature. He can be influenced and persuaded and can be impressionable. Common sense and a practical view of things help. His refinement also softens his Will. He could do with more shrewdness though.

Does his hand show that he will make a good politician?
He seeks responsibility and is ambitious and controlling. Power is important to him. He prefers to lead in a job which requires substantial mental effort. But then, he would put in mental effort in any job he does. Sounds good, as many Indian politicians seem to lack in this department!

As Shashi Tharoor has leadership qualities and executive ability, it would make him an invaluable cog in the government machinery. If he likes power a little too much, well, we can forgive politicians for that. In any case, he has the ability to keep himself in check. He is not dishonest and that is an important qualification for an Indian politician as well! Money is not his driving force, power is. He certainly desires money, not just because he likes to live well (which he does), but because of the power it brings him. Status symbols are important to him.
The only thing that could prevent Tharoor from being an ideal politician is that the shape of his hand indicates a certain amount of selfishness. He tends to see things from his own narrow perspective all too often.

Other qualities
Tharoor's finger placement shows his prudence and cautiousness. He likes formality and has a conservative streak. He is not an open person and will go out of his way to keep certain things he deems private away from the public eye. In India, this is possible as our reporters are more interested in the private lives of actors rather than politicians.

He has an excellent power of expression and this is clear on his hand, from the developed first phalanges to the long fingers and the headline. However, he is not so much an original or creative thinker. What is important is that he has an academic bent of mind, and a strong focus in life.