Arnab Goswami – what lies behind his television persona? 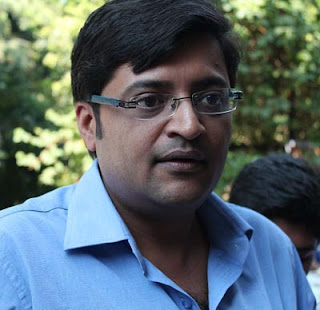 Arnab Goswami has made a name for himself with a flamboyant type of journalism, heading/owning as he does two of the most popular channels in India, of the Republic stable. There are critics galore but then there are devoted fans too.

One wonders what makes the man who he is. Shouting and being rude is a part and parcel of his grandiose television persona and at times the “debates” get so heated as to sound almost deranged. Some feel that Arnab is not altogether sane…well, his hands tell us otherwise!

The shape of his hand is normal, in the sense that he has a rectangular palm and medium length fingers, tapering at the end. All of his lines – the head, heart and life – are well etched, although the heartline with its large fork dominates. The headline is clearly separated from the lifeline and is very high. Not only does it start high (at the base of the mount of Jupiter) it keeps going higher (not so common at all) and remains in this high position till around the time it reaches the ring finger. This narrows the space between the head and heart lines. It’s not too dissimilar on the left, passive hand. The Fate or Saturn line, though deep at the start,

is not that good (considering the strength of his other lines) as it makes it way up to the mount of Saturn. The mounts of Jupiter, Mars and Moon seem the most developed mounts. The thumb surprisingly is not that strong, considering the rest of the hand.

You can check out the photographs of his hand here, here and here.

The hand shows extremely high ambition; an intense desire for worldly success, as shown by the headline. The heartline is however dominant and this creates an interesting complexity in the personality. In hands with high headlines, either the headline dominates or the headline is at least around the same strength as the heartline because it stands to reason that people with materialistic and worldly ambitions are driven by their head, not their heart. In Arnab’s case, although he has these high ambitions, his personality is driven by the heart. How this plays out in real-life behaviour and attitudes is difficult to assess. To add to this is that the hand shows a genuine difficulty in seeing another point of view, although this quality is moderated as he gets into his fifties.

Another complexity is that Arnab Goswami’s hand does not show a very strong Will (this is different from will-power). By Will (shown by a long top phalange of the thumb) it means the ability to get things done through other people. Basically, it translates into leadership. People with average thumbs are not true leaders; they are either not interested in leadership and do their own thing or are followers. They can at times bend under pressure. Again, this is different from the ability to withstand adversity and fight because that particular ability is shown in Arnab’s hand. A certain battling element is intrinsic to his nature.

The hand shows good mental balance, despite the strong heart qualities. Arnab knows what he is doing and is very clear about what he wants. When combined with the reading of his other lines and hand shape, his hand shows a well-grounded, mentally stable person. And he is certainly not a heartless guy. His hand doesn’t show this at all. In fact, he is a very emotional person. Another thing. The way his hand is currently, it shows that he is not satisfied with his achievements. As a journalist, one would think he has made it, with two channels under his belt but there is something he probably feels is missing. Maybe.

More: Read about Sushant Singh Rajput or another journalist like MJ Akbar or read the hand readings of Indian politicians like Subramaniam Swamy or Arvind Kejriwal or the bureaucrat, Kiran Bedi.