How different are Andrew and Chris Cuomo? 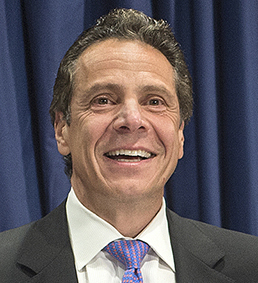 Andrew Cuomo, the ex-governor of New York, has been in the news lately with sexual harassment allegations and unfortunately his brother Chris has been accused of inappropriate behaviour as well. Their personalities are however quite different as shown by their hands.

Andrew Cuomo’s hand shows a person who is passionate, at times volatile, and also quite impulsive. There is intensity and energy in the moment, the kind of intensity can be very useful when one is focused on a goal. Such people give their everything when they set their mind on something. The flip side is a difficulty in seeing the other side, and it can at times result in bullheadedness. Yes, the hand also shows warmth and

a caring nature, but it also shows insecurity, cynicism and controlling behaviour. The hand also belongs to a person who likes to enjoy life and is a people's person. Not very surprising that Andrew Cuomo chose politics as a career.

The hand is a fleshy hand with the mounts of Venus, Jupiter and Moon and Mars quite developed and shortish fingers. One of the most prominent signs on his hand, besides the fleshiness, is that Andrew has a Simian line on his right, active hand (head and heart lines fused together) and the fateline is tied to the lifeline considerably and likely starts on the Venus mount.

Here are some links to photographs of Andrew Cuomo's hand.

The left hand shows the head and heart lines as separate, even if they are closer together than normal. The fateline on the left passive hand is also a little separate from the lifeline if one compares it to the right hand. The thumb is very supple at the top joint and the fingers are thick too.

So while Andrew Cuomo is not a bad guy, he can be impulsive, aggressive and may not always think objectively.

Chris Cuomo's hand also shows the mounts on his palm well developed, specifically, the Moon and Venus mounts although they seem lesser developed than that of his brother. There aren’t too many other similarities on their hands. Chris has a lower set thumb and the second phalange of the thumb is significantly slim. And he does not have a Simian line although his fateline is attached to the lifeline and may even be emerging from the Venus mount, like on his brother's hand. The headline is also distinctly separated from the lifeline.

Here is a link to Chris Cuomo's hand.

Unfortunately not too many photos of Chris Cuomo’s hands were available on the net and therefore it is difficult to say too much about him. What one can say is that he is a clear thinker, and a decent, thoughtful, and gracious person, quite practical and diplomatic. He is very bold and independent-minded and someone who may not always heed another's advice. Although impulsivity is present, his hand shows self-control as well.

Related Hand Readings: Check out the hand readings of other American celebrities on this blog, as well as U.S politicians.
Or read about Politicians from all around the world.