Dr Manmohan Singh’s hand is that of an intellectual but his hand also shows that he is not that great a leader. This is an accusation that is often hurled at him by many. However, his hand shows that he has willpower, thinking prowess and determination. So what is it about him that makes him fall prey to manipulation? Is he really a weak man? His hand can give us an idea as to who Dr Manmohan Singh really is. 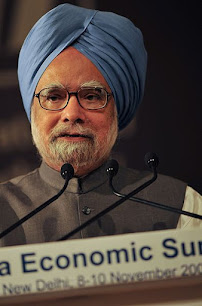 is broken, but deep and well-etched in the first half. Unfortunately, it is weaker in the second half. He doesn't have too many lines, and the mounts of Moon, Mercury and lower Mars are well developed, but upper Mars is less developed, although not flat. The highly developed Mercury mount is significant.
His palm and fingers are balanced with each other and his Jupiter (index) and Saturn (middle) fingers are of a good length. Overall he has straight fingers which are balanced with each other in length.

These hand features show him to be broadminded, and intellectual, with a practical mindset but also with strong ideals. Far too much idealism in fact. He has willpower and is aggressive too, but it is unlikely that he can stand up to anyone formidable. His thinking is likely to waver, and he does not have mental resistance to stand up to his ideals and he is likely to back down because he lacks staying power and mental strength. He is not the kind to face the enemy on the battlefield. He will back down.

Yes, Dr Manmohan Singh is capable and has the ability to achieve what he sets out to do, but only as long as there is not too much resistance, the environment is conducive to it and he is given a free hand. His pragmatic outlook can become a disadvantage because he could give in to what he sees as inevitable. He is not a fighter. Therefore his good qualities do not work in a leader.

His finger knots, the stiffness of his hand and the thumb together tell a story. They tell us of his conservatism, his determination and steadfastness. He is a thinking type and will plan and deliberate. Meticulous planning and scheduling are an intrinsic part of his personality. He can be organised and analytical to an extreme. He likes to pick things to pieces, study them, and make evaluations. This quality along with his excellent reasoning powers, strong concentration and memory (more so in his younger days) is a powerful potion for academic success.

The hand texture shows sensitiveness and refinement. Such a characteristic is a desired quality. To such people, coarseness and crassness can cause actual pain and they will do anything to avoid it. The sensitiveness and refinement are probably one of the reasons which prevented Dr Manmohan Singh from being a strong leader. It kept a check on his outward aggression. Aggression has no meaning unless you can withstand opposition. So if this means that he is weak, he is. But actually, it is because of his refinement, and ideals which tended to prevent him from fighting. He is not the type to dirty his hands.

Manmohan Singh’s hands show that he has good judgment, and the ability to see another’s point of view. There is a lack of stubbornness. He is honourable and religious.

But we already know that he was made the Prime Minister because those who knew him were aware that he was trusting, decent, and not hungry for power. The kind of man who would hate to make a scene or get into a shouting match. A man they would find easy to manipulate.

Related Reading: Jawaharlal Nehru was not a weak leader or read about Dr Sarvepalli Radhakrishnan

Read about other important politicians like Narendra Modi, or check out Global Heads of State.

Or perhaps you might like to read this one, which explores the difference between Indira Gandhi and Margaret Thatcher, both of whom were called "Iron" ladies, one from India, and the other from Great Britain.

Read about Indian politicians like Sonia Gandhi,  L.K. Advani, Mamata Banerjee, and P Chidambaram, or you can check out other Politicians from all over the world.
(The photo published on this post is a free photo from the wiki and attribution is here: World Economic Forum, CC BY-SA 2.0