Pope Benedict XVI's personality as seen from his hands 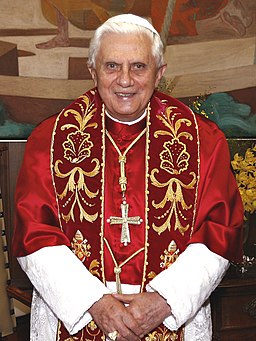 Pope Benedict XVI is known as a person with strong views, and this aspect of his character leaps out at you from his hands. The colour and texture of the palm, the thumb and its phalanges, the heart line as well as the seeming lack of suppleness of the hands - all point to it. Several signs pointing to the same trait intensify the strength of the reading.

But what lies behind his strong stand on various issues like abortion and homosexuality? What is the Pope really like? Are his views genuine? Or is he playing to the gallery?

Very likely he is genuinely good, at least that is what his hands tell us. And a reformer of sorts. The values most important to him are
the ideals of righteousness, honour, ethics and religion. Religion taken to the point of belief in the supernatural. He is also quite straightforward and direct in his views…he is what he appears to be. He has strong ideals and he wants to live by them.
His fingers are fairly straight and have conic tips and long first phalanges, and some tips may even be pointed. The fingers are more short than long and his thumb is long relative to his fingers and hand, with a slightly broad/thick second phalange. The Mercury (pinky/little) finger is long. The different Mars mounts on his hand are well developed but the Venus mount is average and the Lower Moon mount is developed.
The lines on his palm are deep and well-etched and the heart line is dominant. The headline is finely etched.

He is fairly quick to think and act and will fearlessly express his views. He is likely to do it in no uncertain terms and aggressively. He has also very high mental strength and staying power, which can perhaps show him to be a soldier (in this case of God) as well as a person who will take a cause to its very limit, to an extreme. And yes, his hand shows a temper if things don’t go his way. He is not the type to do things by halves. He wants action and is impatient for results. The Pope’s strong views, the strong desire for action, his aggressiveness, as well as refusal to compromise or give in easily, can make him a rather formidable person.

He lives in a different world
His hand shows that despite the above personality characteristics, he likes to study, read, and very often immerses himself in the realm of the mental, which can also be understood to be the realm of theory. He is not very interested in the commonplace or the mundane, and neither does he like to get too much into the details. His ideals and intellectualism do not come in the way of his ability to execute well and manage money which he can do well. However, money by itself means nothing to him. He may enjoy his comforts, but above all comes his faith.
He is not a warm, people person, however, although he is very good at understanding them, and thus could possibly live in an ivory tower, and at times find it difficult to connect with his fellows. He is likely to feel very strongly about what he feels contempt for and may not be understanding in this aspect.
He is quick, and persuasive, and his persuasive powers and the power of eloquence is very very high. It also gives him the power to evaluate people, and manipulate them.

The most important line in the Pope's hand is the Life Line, but although it shows that he is blessed with natural health and plenty of energy and it seems that his heart rules. This is not surprising considering the rest of his personality. His headline shows intelligence no doubt and he is also something of an intellectual, but despite this, he could let his emotions take precedence when he feels strongly about something. Emotions which will primarily be concerned with a love for his ideals, which are very strong and consequently, anger towards those whom he considers wrong.

If one has to sum up his personality as seen from his hands one can say that he is a person set and determined in his ways, a man who towers above others by the sheer force of his personality, with a strong belief system and ability, talent and of course, beliefs. The only downside is that he can lose touch with his flock in the process.