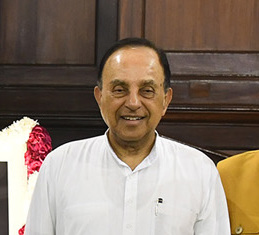 Subramaniam Swamy is a controversial politician, seeming to say the wrong thing at the wrong time and at the wrong place…what makes him so?
His hands can give us an insight into his character.

He has fleshy hands and slightly thick fingers too, including the thumb, but not to an extreme. The mounts of Mercury, Mars and Jupiter are well developed, and the Mercury (little) finger is not too long although quite straight. The Index (Jupiter) finger is bent and the middle (Saturn) finger is a little bent too, and also a little short. The first and second phalanges of the fingers are all long. In photographs the lines on the hand
are not very clearly defined, but evidently he has long straight lines of head and heart, fairly close to each other.

Check out his hand photos here.

The man is emotional no doubt, and intelligent as well, with highly developed logical thinking and analytical skills. He may not find it easy to see other points of view though, and can, in fact, stick to his viewpoint; dig in his heels. Possibly his strong emotional side has something to do with it. He tends to be passionate and creative but prone to more moodiness and restlessness than the average person. There is a dark side to his imagination, and some cynicism as well.

The tendency to be direct and not very diplomatic exacerbates the situation. It can result in an outspoken person.

Swamy has a manipulative side, and that means he usually has an agenda, usually something up his sleeve.

(Subramaniam Swamy is a 77-year-old Indian politician and economist. He obtained his PhD degree from Harvard at the age of 24 and has since then been an academician and politician.)

You might also like to see hand readings of other Indian politicians like Will Pranab Mukherjee make a good President? or the Hand Reading of Akhilesh Yadav or The long ring fingers of Sharad and Ajit Pawar or Varun Gandhi and Rahul Gandhi - a comparison or Arvind Kejriwal's hand reading or Nirmala Sitharaman's hands

Or read about more than scores of other Politicians, from India as well as the rest of the world.
Free Photo: Ministry of Parliamentary Affairs (GODL-India), GODL-India