Tayyip Erdogan, the President of Turkey, is one of the most popular leaders Turkey has had. What does his hand reveal?

Some prominent features of his hand are his conic tipped fingers, large fleshy palm, strong mounts of Mars, Jupiter and Moon, a bent and slightly short Jupiter finger, strong Apollo finger with a well-developed third phalange, longish palm and shortish fingers, with a long, slightly sloping Headline and a low set Heartline.

From the hand, it is clear that idealism is strongly present in Tayyip Erdogan’s personality, and it can make him inflexible at times. There is also an element of superstitious behaviour. These are
prominent characteristics and explain the religiosity. 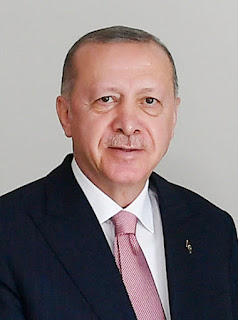 He is likely to be quite aggressive, and can also stand his ground, and that is a good thing for a politician. But there is a weakness. He is likely to be overly concerned with public perception. There would be self-esteem issues and a fear of disapproval. Coupled with an overwhelming desire for fame and name, this fear of what others will think becomes enhanced. It can make him back down in certain situations, even when it comes to some closely held beliefs.

This means he would pursue agendas that he believes will bring him renown in the eyes of the people/others. His hand also shows an attachment to status symbols.

Tayyip Erdogan is not entirely straightforward and can be manipulative, but this is normal in successful politicians as is the intense desire to be in the limelight which is shown on his hand.

His thinking can be a little narrow, and this means an element of selfishness creeps in.

Although Tayyip Erdogan has a balanced Headline, overall his personality falls more in the intuitive and self-indulgent realm. When combined with the insecurities present in his personality, he has issues he needs to deal with. Someone like him would want to create a defined, robust structure and organisation around himself to increase the feelings of security. Religion can often provide this structure. In political life also he will feel insecure in a loose structure with differing opinions. These insecurities result in him not being inclusive, and that is never a good thing for a politician.

Tayyip Erdogan is not unreasonable though, and not stubborn.

I searched his hand for something extraordinary, something that would lift him above the average politician. I did not find it. The strong desire for power, for name and fame, and manipulative behaviour are traits of a typical politician. His hand shows shrewdness, the ability to use the right words and these too are traits of a typical politician. There needs to be something behind this - a depth of love and warmth for people, perhaps altruism to some degree, but this is not shown on his hand. The quality of pragmatism which is often seen in successful politicians in western democracies is not evident either.

If one looks at the major personality characteristics seen on Tayyip Erdogan's hand, the overall impact is not very encouraging for a head of state. It shows a person who tends to be judgmental, controlling and lacking basic pragmatism.


Photo credits: President.az, CC BY 4.0
out what the hands of Heads of State from all over the world tell you.