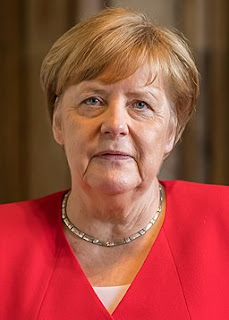 Angela Merkel's hand is not an extraordinary one, but she is the
Chancellor of Germany, now in her second term. Her success is not dramatically imprinted on her hand but it does show strong willpower, the ability to control others, and determination. She can be a little brusque, however, quite direct. Her hand shows a no-nonsense type of personality and perhaps that is why she is called the "Iron Lady" by some and has been compared to Margaret Thatcher, Britain's ex-Prime Minister. However, Merkel is not really an "Iron Lady", and is quite different from her namesake – Margaret Thatcher.
She has a slightly small hand with fingers on the shorter side, some of them bent. And her hand is long, with short fingers which are a little thick. She has well-developed mounts, particularly the mounts of Venus, Jupiter, Moon, Lower Mars and Mercury. Her hands seem a little small, but women tend to have smaller hands (even after taking into account their body size). The thumb is long with the first phalange not too long and the second seems a little thick. Her head and heart lines, though not too long, are of medium length.
You can see an image of Angela Merkel’s hand here and here.
Her hands tell us that she has an emotional nature and this was a little unexpected. However, she has a good head on her shoulders and is a pragmatic person who will not let her emotions get the better of her.
Margaret Thatcher's hand shows plenty of ego, stubbornness, almost a kind of bull-headedness. It also shows a personality who was bolder and fearless, bordering on the arrogant, and also domineering; someone who wanted her way. These qualities would make Margaret Thatcher a formidable personality. Angela Merkel does not possess most of these personality characteristics, although some amount of aggression is present.

Angela Merkel
Although Merkel's hand shows less of a cerebral mind-set, her head and heart lines are better balanced. This points to someone with her heart in the right place, more open to others’ opinions, yet a person very much in control; a person with a strong will and leadership qualities. Sometimes, this is exactly what one needs to be successful. A high dose of common sense, the ability to not be swayed by emotion, being humble enough to listen to others, and the will to implement.

Angela Merkel’s hand show a quick, action-oriented nature but she is not the type of person who will dig her heels in. She is flexible and thus one is not sure why Angela Merkel has been called the "Iron Lady" because she isn’t really one. She is simply a strong, determined leader and most importantly, a clear, practical thinker.

Merkel’s hand shows some negative qualities - impatience, shrewdness and manipulation and also lack of diplomacy. Thatcher’s hand shows manipulative tendencies too, but not as pronounced.
Merkel's hand also shows cynicism and a need for privacy. There is no great desire for power seen on her hand.

You might also like to read about the personalities of other well-known women politicians like Hillary Clinton of the United States, Indian-Italian Sonia Gandhi, Britain's Princess of Wales, Lady Diana or Margaret Thatcher.
Or check out the personality readings of other European heads of state like that of Nicolas Sarkozy of France, Gordon Brown of Britain, Barack Obama and Donald Trump from the US, or Lee Kuan Yew of Singapore, Narendra Modi from India and many more from other parts of the world like Vladimir Putin of Russia, Wen Jiabao of China.
Or just click on the label Heads of State to read about country heads from different continents or the label Politicians to read about politicians from different countries of the world.
Free photo from the wiki: © Raimond Spekking