Imran Khan, known to the world as a cricketer, philanthropist, politician is a celebrity of sorts. But who really is Imran Khan, the person?

The overall shape of Imran’s hand is good. It’s large, well-formed, with a good length of fingers (most of them square-tipped and some slightly bent), a broad palm, and a long thumb which is very slightly low-set. What this means that Imran is a good person, broad-thinking and pragmatic, and not too religious. He is also strong-willed, even stubborn.

However, it’s clear from the headline that when it comes to organizational ability and intellect, he is 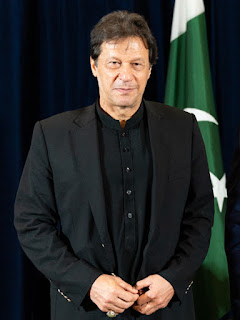 average, although he is very shrewd. His headline also shows that his greatest weakness is that he is changeable. He does not appear to possess that consistent thinking that is so important in a leader. People who knew him a decade ago would feel he has changed, as would people who meet him a decade from now. Long-term thinking and fixed values is what he would find difficult.

Check out a hand photo of his here and here.

He has the reputation of being a straightforward politician, but his hand does not bear it out. He is not entirely what he seems, and he is a fairly deep person, and would not reveal his deepest feelings to others. In fact, Yousouf Raza Gillani's hand shows him to be a more straightforward person than Imran Khan. This refers to the straightforwardness and genuineness of personality, a personality which is the same inwardly and outwardly and does not refer to being honest or decent, which Imran Khan probably is.

Imran enjoys fame and name, and that is probably why he is interested in politics. There is nothing wrong with that type of motivation. Unless people enjoy being in the public eye, they won't turn to politics. Either it's idealism that attracts a person to politics or it is a desire for fame or both.

His thumb and heartline show some humanitarianism if one compares him to the average person. However, there is a fair amount of cynicism in his personality, not a very good quality for a politician to possess. He would find it difficult to summon a genuine and deep passion for an ideal. Imran's Khan's hand does not show idealism as such. In fact, it shows cynicism. Such politicians could compromise on principles because they feel this is the way of the world.

You might also like Yousaf Raza Gillani hand reading or Nawaz Sharif or Shehbaz Sharif, or the Hand analysis of Ayatollah Khomeini or Malala Yousafzai or Shoaib Malik

Or check out the hand readings of politicians from other parts of the world: Vladimir Putin's hands give us a glimpse into his personality or Mitt Romney or Barack Obama? or try the label Heads of States from different parts of the world.

(Photo is a free one, in the public domain, taken from the Wikipedia)