Many Hollywood stars marry once or twice, if not thrice. However, Leonardo DiCaprio is a known player and doesn't show any signs of getting married. He doesn't seem to want to marry. What makes him different from his famous colleagues in Hollywood? Reading his hand was the nearest I could get to an answer.

The dominant personality traits shown by his hand is an enjoyment of solitude, high sensitivity and imagination that can border on the morbid. His hand also shows moodiness, with a certain amount of self-centeredness and restlessness.
There are other reasons why Leonardo could be a commitment-phobe.
Regarding his hand features, the most developed mount on Leonardo’s hand is the Moon mount, and he has what are called sensitive pads on the tips of his fingers, and the fingertips are a mix of conic and rounded. The thumb is a little low-set. Other features of his hand are a fleshy palm with slightly thick and bent fingers and developed lower phalanges, particularly that of Apollo (ring finger) and Saturn (middle finger). He has a fairly straight headline, slightly sloping, and it's quite long. The heartline is fairly straight as well, and not that long.
Check out a hand photo of Leonardo Dicaprio's, here and here. 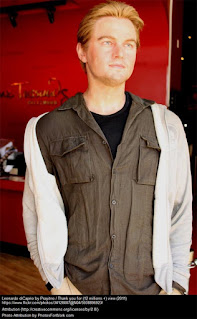 He enjoys luxury, and there is some attachment to status symbols and overall, he likes the good life.
People with the kind of character traits he possesses, do marry, even if they do not make ideal partners. They often remain kind of 'autonomous' and are generally not that keen to commit. Very successful people are unlikely to succumb to societal pressures when it comes to their personal life and Leonardo will not marry unless he truly wants to.

No doubt Leo is a practical man, and his head is in control. Besides, he tends to be sensual and sexual rather than romantic and idealistic when it comes to his attitude to love. Such people usually do not have a huge problem moving on in relationships.

This does not mean that Leonardo DiCaprio is mentally cold, although he can be manipulative and mean at times. He has fire in his temperament, but this is different from sexual passion.

His hand reveals extraordinary ability. But it is character traits like pragmatism, common sense, shrewdness and willpower which add to the success quotient. The sensitiveness that tends to make him hyper-aware of his surroundings and his vivid imagination would be an asset in his profession.

Although he has a materialistic outlook, philanthropy is shown in his hand. This points to someone who will be good to the world at large, despite his known fickleness when it comes to love relationships. And perhaps one day Leonardo’s pragmatism could make him commit. He would be happy with someone as autonomous as him, someone not demanding, and someone who will give him plenty of creative space.

(Leonardo DiCaprio is a well-known actor from Hollywood. Although American, his ethnicity is half German, part Italian and part Russian)

Related Reading: Insightful characterisations of famous Hollywood actors like Tom Hardy, Tom Cruise, Ben Affleck, Johnny Depp, Julia Roberts, Nicole Kidman, Hugh Jackman, or an actor of yesteryear: Marlon Brando. And there are many more such personality readings of actors, actresses and film directors: Try the label Hollywood! Or there are also hand readings of Bollywood actors on this palmistry blog.