The hand reading of Julia Roberts

Julia Roberts is always smiling in her photos, but her hands show that she is a very serious, intense and grounded person. This can be seen from her strong Saturn finger and the Saturn (Fate) line. Roberts is serious without being cynical, and that is a good balance. She is also grounded in reality and is a hard-working, trustworthy and dependable person, confirmed by her Headline. Other signs like the long hand and square tips confirm the reading.

Her long and deeply etched Heartline and developed Venus show that she is very loyal and has a deep capacity for love and passion. Despite the Saturnian qualities, her hand shows her to be a
warm person, although not extroverted. Her innate cautiousness, thoughtfulness, secretiveness and suspiciousness prevent her from wearing her heart on her sleeve. You can check out her hand photo here. The picture below is a free photograph. 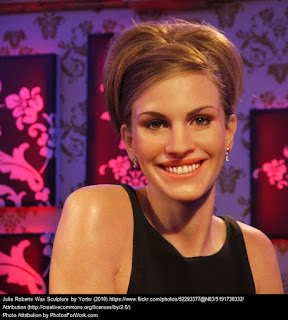 An interesting personality trait of Roberts is that she is very diplomatic and smooth, and one of the reasons for this is that she is extraordinarily perceptive and sensitive to what others feel, and therefore would not show her true feelings. She does not like to hurt others and will herself find it difficult to stay in a relationship where the other is not sensitive to her moods and her feelings. She is the type who is likely to develop a public persona which is quite different from her private one. She would guard her privacy as much as she can.

She is not perfect and a not so pleasant aspect of her personality is revealed by the strong development of the lower mount of moon. Although she is not the melancholy type, there is some sort of negative imagination at work and it makes her wallow in misery at times.

Her hand shows that she can be controlling and manipulative.

The good thing is that Julia Roberts is not an attention-seeker like so many celebs, and is not the type to ever get addicted to fame.

A lot of talent is shown on her hand, and her dedication to her craft, intelligence, and sensitiveness to the environment and to others all add to it. Julia Roberts is an introspective person and a thinker. An actress with a strong mind.

She is known to be a converted Hindu but her hand does not show her to be religious. She may believe in a higher cause very deeply, but religiosity is not shown on her hand. She would be very down-to-earth about her beliefs. Generally speaking, those who convert can become obsessive about their new religion, but Roberts' hand does not show this.

Related Reading: Michelle Yeoh's hands show her to be different or Nicole Kidman's hand reading or check out the hand analysis of other Hollywood celebrities.
Posted by Nita at 11:51 PM