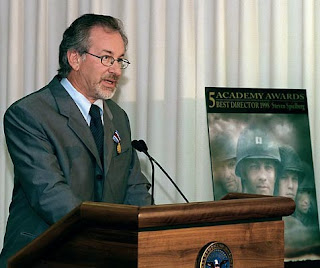 If I had not known that Steven Spielberg was a film director I just might have mistaken him for an inventor, although a money-making one. His fingers, headline, fingertips, phalanges, and Upper Mount of Moon reveal his imagination, creativity, intelligence and a strong desire for worldly success.

Spielberg was not born this ingenious. Although he inherited a high intelligence, he had an average
imagination, and a slightly morbid one at that. Moreover, the headline on his right hand (the right hand shows the current state of mind on a right-handed person) seems slightly more curved than the one on his left hand. The Upper Mount of Moon is also far more developed. These two signs (particularly Moon) indicate that Spielberg’s imagination and creativity increased significantly as he grew older. This happens when a person exercises and uses his imaginative faculties constantly in his young days. Interestingly, he developed the healthy and creative side of his imagination to its fullest extent, although the morbid side remained with him.

Check out his hand photograph here. The photo below is of Spielberg's hand impression and is a free photo. 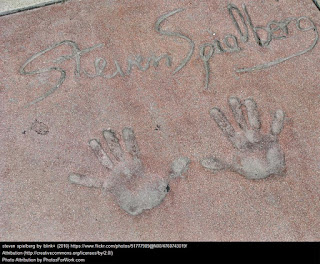 Spielberg has the kind of vivid imagination and creativity that successful composers and writers possess. He is an original thinker as well.

However, Spielberg’s Mercury finger tells us that it is not writing that he excels at. He is not exceptionally articulate, and therefore it is natural that he would channelize his imagination into another creative field. He turned to making up stories on celluloid.

He has a preference for facts rather than fancy and a blunt straightforward approach. That is clear from his square-tipped fingers, the shape of the headline, thumb and the hand. Mushy films are not his forte.

The shape of his palm tells us that he has breadth of vision. People like him always see the whole picture and that too from several perspectives, excellent quality in a filmmaker.

His ability to see things as a whole is also evident from the shape of his fingers. He is result-oriented, and when he hears of an idea he is interested to know if it is workable, if there is money in it. He thinks big.

On a personal level, he likes to enjoy life and enjoys its comforts. He is straightforward, although can be quite aggressive and blunt.

(Both the photos published with this post are copyright-free pictures, the first one taken from Pixabay. The other has its credits given)

Read the hand analysis of other Hollywood personalities, and also those from Bollywood. Check out what the hands of the brilliant Chilean director Alejandro Jodorowsky