Aamir Khan, a leading Indian actor and director, has a complex hand. It comes across as belonging to a strong-willed person with vision, intelligence and talent. The contradiction lies in the fact that he can be quite unreasonable despite being intelligent, mean despite a strong compassionate side, and he may give in to his physical self despite enormous self-control.

The shape of his palm is broad, and he has shortish fingers, with good first and second phalanges. The Mercury (little) finger is long, and most of his fingers have squarish tips, and all this shows
that his head sits firmly on his shoulders. His thumb shows an obstinate determination, but he manages to handle 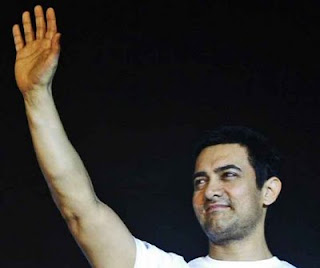 opposition with flair when he wishes too.

His Mars, Moon and Jupiter mounts are well developed and these reveal the characteristics of these mounts. Combined with the indicators from the shape of his hand, the development of these mounts confirms that Aamir is fairly calm and controlled. His head and heart lines well balanced.

Check out a hand photo of his right hand here.

He is shrewd and clever beyond the ordinary, and he has the ability to judge human nature and is a clever speaker/writer. His shrewdness extends to money matters.

There is no doubt that Aamir has plenty of acting talent and is a brilliant film-maker too. This is because of several factors. One is his remarkable breadth of vision. His humanitarian side is also strong, and enables him to make films with meaning. His thumb clearly tells us that a calling without a larger meaning holds little appeal for him. He will never be satisfied with making films just for the box-office.

Then there is his coolness, ability to be objective, as well as good executive ability, and all of these qualities help him to be the successful man that he is.

He has to be careful of his impulsive side because he is strong-headed as well (thumb shape), and this could lead him to do things he might later regret. However, his innate nature is a cautious one and in most things he treads carefully. He is likely to be impulsive when his emotions and physical passions are aroused. His hand shows a strong sex drive. He can also be quite volatile and hot-headed at times (strong mounts).

His quickness of thought and ability to act quickly, as well as high energy, enables him to see the essence of issues immediately. In addition, he has good analytical and thinking ability. Aamir Khan's hands show that he is a person who can easily outwit others; he leaves them red-faced more often than not.

All this may sound impressive, but unfortunately, there is a side to Aamir Khan which is not very pleasant. His hand shows his willfulness and obstinacy, and also his controlling nature. It is his ability to think and a practical approach which can possibly balance out these weaknesses.

Check out the hand readings of all the actors from Bollywood or Hollywood.