Wen Jiabao, the Chinese Prime Minister, has a hand that shows a love for his country and also strong idealism. This is common in many good politicians. At the same time, his hands show that he is humble and at heart, not very confident deep in his heart.
His hand shows that he has a genuine warmth for people, a reasonable attitude, and a lack of stubbornness. He is not diplomatic, however; can be blunt. He is an intelligent man, with a good imagination and in that sense, he can be called a visionary.
He has a broad palm, medium length, slim and straight fingers although his fingers are a little bent. His hand is close to what palmists would call a square hand shape. The first and second phalanges of the fingers are long and the mounts are developed. The Jupiter(index) finger with almost a pointed tip could well be a little short and is probably low-set as well. The Apollo (ring) finger is dominant. 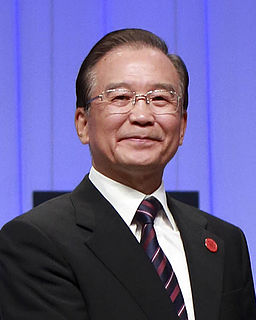 The lines on his palm are finely etched, and well-spaced out. The head and lifelines are joined for at least an inch (if not more) and the headline is sloping. The mounts on his palm are quite high, with the Venus mount and the Mount of Moon dominating, although Lower Mars is also developed. This makes the lower part of the hand a little thick. The thumb is long and its phalanges are well-balanced with each other, in the sense that the first (Will) phalange is not too long, although the second (Logic) phalange is a little broad.

Check out photos of his hand, here and here.

These hand features tell us that he enjoys likes fame and name and at times could overestimate himself. He is the type who would be willing to see another point of view and that is a good thing but he is not that strong a personality and could compromise.
There have been accusations that his compassion for people is fake, but his hand shows that this is simply not true. Not only does he love people and humanity, but he also has genuine sympathy and warmth present in his personality. If people did not see him as genuine it is probably because his hand shows that he is too straightforward. He is shrewd, maybe even a little cunning, and definitely has a desire for the limelight. He is also controlling and can be quite pushy and aggressive.
He is an independent thinker and also quite action-oriented. At heart, he is a practical man. He thinks quickly, and at times acts quickly, particularly when it comes to issues of less import, or those that he feels will make him look good. Another reason why people may not trust him.

His hand also shows a cautious, reserved nature, introverted, and someone who is a little insecure about the future and about himself. Wealth matters to him because of this reason although he cannot be considered a materialistic person.

(Wen Jiabao is the sixth and current Premier of the State Council of the People's Republic of China, serving as China's head of government and leading its cabinet).

You might also like to read the hand readings of Xi Jinping, the Chinese President or Li Keqiang the Chinese Premier, or Mao Zedong or about the Chinese businessman, Jack Ma.
Or you can read about Hong Kong's new leader John Lee.
Or perhaps you want to read The Dalai Lama's hand analysis or other hand readings on those from China or all Politicians. Or you can find out what the hands of Heads of State from different parts of the world tell you about their personas.