John Lee - his hands reveal his mental strength and cleverness 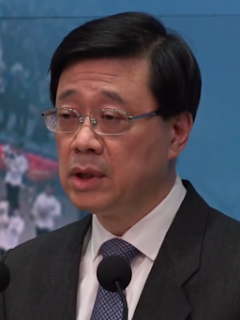 John Lee is slated to become the Chief Executive of Hong Kong. A quick look at his hand showed promise of it being an interesting read.

Lee has shortish fingers and a large, fleshy palm with prominent mounts of Moon, Venus, and Mars. The fingertips are rounded, except the Mercury (pinky) finger which is conic and low-set as well. The first phalanges are good, but not the second phalanges. The thumb is a good length, with an even balance of the first and second phalanges, even if it seems to be held a little close to the hand. The hand is rectangular in shape and the lines are finely etched, with a long headline.

action-orientation. He is a doer and a very capable, very aggressive, determined, and pushy one. However, his hands show that he does not like to get his hands dirty and could well be theoretical. He would have high expectations from others.
He can also stand his ground against opposition. He is a strong person who likes to have concrete, practical goals to work with, and is not the idealistic type.

You can see his hand photos here and here.

Although moody, restless, and even solitary to some extent, he would be self-contained emotionally, quite controlled.

However, there is some dichotomy in his personality. One aspect of his character is that of a pragmatist, a hard and calculating one, and then there is a more imaginative and creative side to his personality, a softer side, more thoughtful and caring about people. This can make him difficult to understand.

So, which side of him is his true self and is he a genuine person? He may be sincere and committed to his work, but it can’t be said that the face he shows you is his real self. Maybe he doesn’t know who he is; it is almost as if he is two different people, depending on who he is interacting with. His hands show a psychological duality in thinking. This makes it very important to be very careful while interacting with him.

John Lee has the kind of personality which can reach out to people and connect with them. Besides, he can be fairly eloquent and persuasive, often resorting to flowery language or extravagant words.

These personality traits make him a very canny person and it would be difficult to outwit a man like him, more so as he is highly intelligent as well. However, he doesn't have much understanding of business.

When it comes to money, he is honest and not interested in accumulating wealth.

In his early years, he would likely have been shy, possibly introverted, but this does not go with who he is – an active, people-oriented, and very ambitious person. This is probably why he becomes more outward-looking in the mid-fifties and beyond.

You might also be interested in reading about China's Mao or Prime Minister Li Keqiang, President Xi Jinping, or Wen Jiabao.
Or perhaps you might want to know more about Chinese businessman Jack Ma, or Chinese origin actors like Jackie Chan and Michelle Yeoh or Chow Yun Fat.
More related reading: Know more about the personalities of Bruce Lee and the Dalai Lama. Or check out the hand readings of other celebs from China or Politicians from all over the world.
Photo credit: Stand News, Copyrighted free use, via Wikimedia Commons